Crimes Against Humanity in Colombia

To the Chief Prosecutor of the International Criminal Court 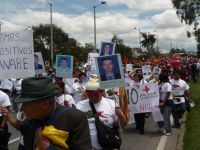 Crimes Against Humanity in Colombia

The undersigned are a group of women, known widely by the Colombian media as "the mothers of the Soacha false positives," a term that was coined to describe the disappearances followed by extrajudicial killings of our children in the hands of active members Colombian National Army.

Our case was known by the public for just over two years, which for its wide dissemination in national and international media, allowed this crime to be visible across the country. Social organizations have documented more than three thousand cases of summary and arbitrary executions, the vast majority of them preceded the crime of enforced disappearance, which allows us to conclude that the deaths of our children are just the tip of the iceberg, the visible and systematic part of what is widespread in Colombia.

But as the practice is perceived as widespread and systematic, impunity has the same characteristics that govern the investigation of these facts. Consequently, the Colombian State ostensibly violates its international obligation to investigate, punish and remedy human rights violations and thus configures the exhaustion of domestic remedies. It behooves us then turn to the international community.

We write to you, as Chief Prosecutor of the International Criminal Court whose jurisdiction over acts constituting crimes against humanity, as they affect the whole world, aware of the seriousness implied, with the primary objective of putting the knowledge of the lack of judicial guarantees in the processes that are carried in connection with the murders of our loved ones.

As documented in the Soacha report: the tip of the iceberg - False positives and impunity, we deliver to you, in these two years of research, there have operated a number of mechanisms of de facto impunity, legal, political and other opportunities that have undermined the knowledge of the real truth, that there needs to be justice and full reparation.

As victims of extrajudicial, summary or arbitrary executions require the intervention of the International Criminal Court, it is necessary to investigate the facts constituting the offense, since there is incompetence of the administration of justice and lack of political will to advance the investigations.

- Another Colombia is possible!