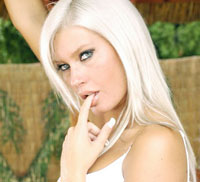 Police were alerted to the act after photographs and comments regarding the show were uploaded by several teenage users on Facebook.

Brigitta Kocsis (Bulgari) was born on 29 September, 1982. This natural platinum blond likes to call herself a "fashion model." She was competing in triathlons from ages 15 to 19. She started modeling during her first year of college, where she was studying to become a lawyer. She left college in Budapest three years before graduation, and went to Milan to model.

In October 2005, Bulgari gained publicity by streaking an Italian football game between Piacenza and Catanzaro, clad only in briefs and a man's necktie. She was arrested, but ended up posing for a naked picture with a police officer.

Bulgari works in Milan and Rome, Italy, and lives in Budapest. After the repeated arrest she may lose her right to work in Italy.