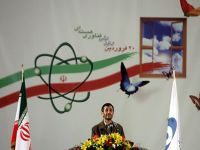 Under the gaze of the world, Iran signed an agreement with Brazil and Turkey to send some of its uranium abroad, changing its stance of refusing a settlement, while Western powers are negotiating new sanctions through the UN Security Council against the Islamic Republic.

To understand the world, the major U.S. newspapers, as well as in Brazil and Europe, have echoed the agreement signed between Brazil, Iran and Turkey for the exchange of material from the controversial Iranian nuclear program.

In spite of distrusting the effectiveness of the agreement to reduce tensions in the Middle East, the international press highlighted the rise of the presidents of Brazil, Luiz Inacio Lula da Silva, and Turkey, Recep Tayyip Erdogan, into world diplomacy on account of the deal with the government of Tehran.

Iran's supreme leader, Ayatollah Ali Khamenei, went on to say that Brazil has adopted independent positions when dealing with the arrogant policies of the United States in recent years.

According to the American newspaper, the Los Angeles Times, if the deal is successful, it will be another milestone in the political emergence of Brazil and Turkey. The two countries are "two regional and global powers undergoing fast growth and seeking to solidify their positions with diplomatic triumphs," the newspaper said.

The New York Times has the same opinion. According to the American newspaper, the agreement may confirm the status of Brazil and Turkey as world powers. The Muslim country, according to the publication, is trying to become the principal political actor in the Middle East.

The New York Times brings up the distrust Western analysts still have about the real intentions of Iranian President Mahmoud Ahmadinejad. According to a diplomat the newspaper quotes, the 1200 kilograms of low enriched uranium that Iran has pledged to send to Turkey represents little more than half of the stock of the mineral in the country.

The British Guardian goes further and quotes diplomats who say that even with the sending of material to Turkey, Iran would still have sufficient stock of uranium to build an atomic bomb. Iranian officials deny the charges and claim that their nuclear program is for peaceful purposes only.

The Spanish newspaper El Pais says that Iran found in Lula and Erdogan two allies of weight to win the diplomatic dispute with the United States and avoid new sanctions.

But the Times says that Ahmadinejad had the facilities to negotiate with Turkey and Brazil, rather than with other powers, due to the trust between the three countries. According to the British newspaper, the initiative of two non-permanent members of UN Security Council should at least complicate U.S. efforts to impose new economic sanctions on Iran

The agreement celebrated in Tehran provides that Iran would send to Turkey 1,200 kg of uranium of low enrichment uranium to be enriched to 20% for use in medical research. Under the agreement, the enriched uranium will be sent within the space of one year. During this period, there will be supervision of Turkish and Iranian inspectors.

However, for the European Union, "the details of the deal have yet to be analysed." An agreement between Iran, Turkey and Brazil for a possible exchange of nuclear fuel could be a step in the right direction, the European Commission said.

"We must await the full details of the agreement, although a positive step in the right direction, it does not deal completely with all issues involving Iran's nuclear program," stressed the spokesman.

The spokesman said the E.U. high representative for foreign affairs, Catherine Ashton, is ready to meet with Iranian authorities to find a "complete" solution to the impasse involving the activities of uranium enrichment in Iran.

"Many of the issues raised by the EU3 +3 (United States, Britain, France, Germany, Russia and China) and members of the Security Council need to be answered," said the spokesman.

France and Germany expressed skepticism about the agreement signed in Tehran. Berlin said that even with the conversation held by Lula and Ahmadinejad, it is important to establish an agreement between Iran and the International Atomic Energy Agency (IAEA).

"It remains important that Iran and IAEA reach an agreement," said deputy spokesman of the government of Germany, Christoph Steegmans, who added: "This cannot be substituted by an agreement with other countries."

Already the French foreign minister, Bernard Kouchner, preferred to to point out that "very important progress" is being obtained in the UN Security Council as to sanctions against Iran for the country's nuclear program.

For the French chancellor, it is the International Atomic Energy Agency (IAEA) who should position themselves on the agreement by Iran, Brazil and Turkey. "It is not us who must respond. It is the IAEA," said Kouchner. "We welcome the agreement and the tenacity with which our Turkish and Brazilian friends carried out the talks. It's always good to talk and it is always better to listen," he added.

For the North Atlantic Treaty Organization (NATO) the agreement between Iran, Brazil and Turkey is "a potentially positive step to resolve the crisis over the uranium enrichment program of Iran," according to its Commander-in-Chief in Europe, Admiral James Stavridis.

"I think it's an example of what we all seek, a diplomatic system that aims at good behavior on the part of the Iranian regime," said Admiral Stavridis.

Admiral Stavridis said, however, that despite being "a potentially positive step, obviously there are thousands of miles to go."

Salehi said the signing of the agreement is "proof of goodwill" and now "the ball is in the court" of the Western powers, and that "the Vienna group (USA, Russia and France) should give an adequate response to the proposal of cooperation from Iran."

The powers accuse Iran of deliberately hiding information about its nuclear program and fear that the country hides its military intentions. The government in Tehran says the only goal of the program is to produce energy, therefore, it is a peaceful program.

The agreement was received with disbelief in Europe. The European Community said that it is a step in the right direction. Britain's Foreign Office said its signature does not interrupt the campaign to seek sanctions against Tehran. The international press also reported the deal with skepticism.

In October last year, the United Nations Organization (UNO) proposed to Iran to send 1,200 kg of low enriched uranium to France and Russia, which would be converted into fuel for a research reactor in Tehran.

Iran agreed to make the deal at first, but then imposed conditions to only exchange material for uranium enrichment at higher levels only on its own territory, terms that the other involved parties to the agreement considered unacceptable.

So far, the only president who had the courage to speak directly, without sending his aides to speak for his country, was the Russian President, Dmitry Medvedev, who said he was considering the deal, but there are still doubts.

"A question is: Is Iran going to continue enriching uranium? As far as I understand from the country's authorities, this work will continue. In this case, the concern of the international community continues!" said Dmitri Medvedev.

The Russian president said that the powers, including Iran, should hold consultations on the agreement for the exchange of nuclear fuel and then make a "brief pause" in negotiations. "After that, we must then decide what to do: Are these proposals sufficient or is something else needed? So I think a short break would not hurt!" Dmitri Medvedev said emphatically.

"The question that arises: is the level of this exchange operation enough? Will all the members of the international community be satisfied? I do not know! We need to see that after this agreement," explained the president of Russia.

Doing chorus with Russia, a government source in Israel said that Iran's government "manipulated" Turkey and Brazil to "simulate acceptance" of an agreement on the enrichment of part of their uranium in Turkey.

"The Iranians have already done the same in the past, simulating acceptance of such a procedure to reduce tension and the risks of aggravated international sanctions, but then later they refused to do the acts," declared an Israeli source to an international news agency requesting anonymity.

Already the Brazilian journalist, Marcos Guterman, of O Estado de Sao Paulo, recalled that the terms of the "agreement" are identical to those that the Western powers, Russia and the United Nations reached last October with Teheran, and was later abandoned by the Iranians. "The difference is that instead of Turkey, it was Russia that would guard the Iranian uranium."

According to Guterman, Tehran's goals are different: to gain time, to explore alliances with temporary members of the Security Council (Brazil and Turkey) and to delay new sanctions, without moving significantly with its nuclear project.

"For Brazilians and Turks, on the other hand, the "agreement" is useful because it supposedly gives them "global" diplomatic weight, which is what Lula and the Turkish Prime Minister, Recep Erdogan, were seeking to reaffirm with every gesture, even if such an "agreement" is not worth the paper it is written on," the journalist and analyst of international politics emphasized.

After signing the agreement, the Iranian president, Mahmoud Ahmadinejad, said he wants to resume dialogue with members of the Security Council of the United Nations. "I hope the 5 +1 (United Kingdom, USA, China, Russia, France and Germany) participate in negotiations with honesty, respect and justice and give response to the great work started in Tehran," Ahmadinejad said.