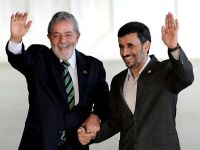 After a meeting with President Luiz Inacio Lula da Silva in Tehran, Iran's supreme leader, Ayatollah Ali Khamenei, praised the attitude of Brazil for having adopted independent positions against what he called "the arrogant policies of the United States."

According to the Iranian state news agency, IRNA, the Ayatollah said Iran "welcomes" the expansion of mutual cooperation with Brazil on the international level. The Brazilian president and the Iranian leader engaged in a meeting which was attended by the Iranian President, Mahmoud Ahmadinejad.

Khamenei thanked Lula for his presence in Iran, but made no comment on the negotiations on the Iranian nuclear program. Lula went to Tehran to present a proposal by Brazil and Turkey to prevent Iran having to suffer sanctions by the UN Security Council because of the impasse caused by its controversial nuclear program.

"Brazil has taken independent positions in its negotiations with the arrogant policies of the United States in recent years. The Islamic Republic of Iran welcomes the expansion of mutual cooperation with Brazil on mutual and international levels," the Ayatollah said after meeting with Brazil's president.

While emphasizing that independent states should cooperate among themselves to change the global "unfair equations," the Iranian leader said: "We believe that the countries that have been marginalized over the past 200 years due to the illogical policies of aggressive powers can have an instrumental role in global development."

According to the state news agency of Iran, the Ayatollah said that Brazil has made great progress in recent years and that the country is "the largest and most influential" in Latin America, and called for expansion of relations between Brazil and Iran and a reform of the UNO.

While commenting on "Iran's stance on international affairs," Khamenei said that "Brazil believes that it is the legitimate right of the Iranian nation and its government to defend its independence and full development."

The UN Security Council intends to adopt new sanctions against Iran, since some members of the Council, like the United States, are suspicious of Tehran's intentions regarding its nuclear program, which is denied by the Iranian government. The Iranian government insists that the program is for peaceful purposes, and that the country does not intend to develop nuclear weapons.

Brazil and Turkey have developed a plan that Lula took to Ahmadinejad. However, en route to Tehran, Lula made a stopover in Moscow, and heard from President Dmitri Medvedev that the proposal by Brazil and Turkey would be the last chance to avoid UN sanctions on Iran and, in his view, the prospects of effecting an agreement on the subject would be 30%.

The Turkish and Brazilian proposal remains the plan of the International Atomic Energy Agency (IAEA), which provides for the enrichment of Iranian uranium in another country to levels that would allow its use for civilian purposes, not military.

During their first meeting in Tehran, Ahmadinejad and Lula did not speak about the Iranian nuclear question. Ahmadinejad, according to the website of the President of the Republic of Iran on the Internet, "thanked the Brazilian president for his support for the rights of the Iranian nation and its position to reform the world order."

"The reality is that some countries that control the political and economic centers and media in the world do not want other countries to progress. Together, we can change those conditions and provide the necessary transformations. This visit marks the beginning of cooperation between two great nations," said Iranian President Mahmoud Ahmadinejad.

In turn, President Lula stated that "Brazil considers its relations with Iran strategic since the two countries can work together with more force."

The content of the conversations between President Lula with the Ayatollah and the Iranian President was not released to the assembled journalists who were covering the visit of the Head of the Brazilian government in Tehran.

Iranian state TV reported that Ayatollah Ali Khamenei accused the United States for the "noise" they made about the Brazilian president's visit to Iran, "The dominant powers, particularly the United States, are unhappy with the independent and influential development of relations between countries," said the supreme leader of Iran.

The enrichment of uranium by Iran is at the heart of the conflict with the international community, which fears Tehran is trying to get the bomb, which is denied by the government.

The major powers have proposed to Iran to send 70% of their lightly enriched uranium to be transformed it into highly-enriched fuel that the country needs for its scientific research reactor.

Citing an issue of "trust", Iran rejected the proposal and said they prefers a simultaneous exchange or in stages with small amounts, made on its territory, which was rejected by the great powers.

Faced with this denial, Iran in February launched the production of uranium enriched to 20%, which accelerated the western mobilization to adopt new sanctions through the UN Security Council.

Iran said that there was an agreement on the quantity and the timing for the exchange of uranium, and were willing to discuss where the transaction would take place, but with concrete guarantees. It also assured that they will receive the necessary fuel for their research reactor.