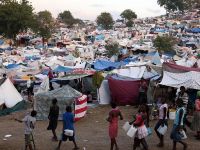 President Rene Preval asked the Haitian Parliament for an extension of his mandate and though the opposition has expressed his rejection, some sectors of society still remain today on the sidelines. Preval wants to extend his mandate until May 14, 2011, but only if the presidential elections do not happen at the end of November.

Although the Constitution of Haiti provides that the power change should be effected on February 7, 2011, the emergency situation that caused the earthquake of this past January 12 may alter the times of the electoral process.

Currently, the minister in charge of liaison between the president and Parliament, Joseph Jasmín, said that Preval has sent the proposal in order to, above all, provide for any contingency.

According to Jasmin, "to govern is to provide" and the delegate just wants to anticipate any situation and have an alternative, with the intention of maintaining stability in the country. On the other hand, Preval himself assured the press that he does not want "in any case it will follow that my power was a constitutional term of five years."

Exactly five years of the chief executive are marked on May 14, 2011, because he took office the same date in 2006. Until then and after the exit by force of Jean Bertrand Aristide in 2004, a provisional government ruled the destinies of the country.

In the first place, parliamentarians and opposition leaders rejected the proposal of the Head of State and some of them suggested that the intention is to perpetuate himself in power. For Paul Evans, a member of the Alternative Forces for Democracy and Progress, the governor has "a personal agenda that has nothing to do with the country's interest."

However, the common Haitian there interests him much more for the solution of his problems until the election and it is thought that the permanence of Preval could help in solving various problems, including employment and housing. The quake of January left more than 220,000 dead and 300,000 wounded, and nearly a million and a half damaged, most of whom are still living in makeshift camps in this capital and its surroundings.

Many think that instead of elections, the international community, the opposition and government should work together to accelerate the construction of housing and find a way to give jobs to Haitians. Either way, many feel that preparing a new electoral standard in the short term may be too costly and always leave doubts about the legitimacy or otherwise of the process. Some even do not think about it, because in their daily schedule only one point appears: trying to survive and getting one's family to do the same.