Russian Policeman Kills Himself Scratching Nose with His Gun

An armed 23 year old policeman in Moscow fell victim of his own carelessness. He decided to scratch an itchy spot on his nose with a gun and accidentally killed himself, the Moskovsky Komsomolets reports. 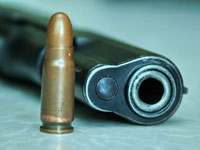 Russian Policeman Kills Himself Scratching Nose with His Gun

The tragedy happened in the court security facility. At 6pm the officer’s supervisor tried to connect with him over the phone to check on him. The sergeant did not answer his phone and the supervisor had to go see him with other officers.

The police found a locked door they had to break and the body of their colleague behind the door. The policeman’s body with a wound in the head was found under the desk.

The investigation ruled out a murder. There was no note that would indicate suicide.

The victim had been serving in police since 2007. He was single and was not registered with the staff psychologist. He was reported to be in good spirits on the day of the accident.

The sergeant allegedly scratched his nose with his gun and accidentally pulled the trigger.