Profile: Piedad Cordoba and the Struggle for Peace in Colombia

After violence, discrimination and also having been kidnapped - in her case, by right-wing paramilitaries - Colombian Senator Piedad Córdoba has dedicated herself to fighting for the liberation of hostages still existing in her country. 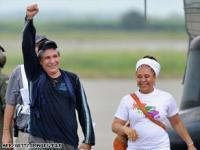 Profile: Piedad Cordoba and the Struggle for Peace in Colombia

The images of Piedad Córdoba that the world knows show the 55 year-old Colombian senator boarding a Brazilian helicopter and leaving in the direction for lost places in the Colombian jungle, while journalists from halfway around the world are looking at the sky. She returns a few hours later, in the company of freed hostages.

When the lights of the cameras are off, the country should thank her for her work and efforts. However, not only do they fail to do so as well, repeatedly they return the favor with insults and disqualifications.

Iván Cepeda Castro is the spokesman for Movica (Movement of Victims of State Crimes) and was recently elected to Congress. Piedad knows him since the time when she and his father kept a close personal and work relationship.

"This relationship with my father," says Ivan, "was very meaningful to her and, somehow, transformed her vision of the country. For a long time they shared human rights defence projects in parliament and, when they killed my father it was a blow for her, not only politically, but also personally. The search for justice for the death of my father made us every close. My friendship with Piedad was born as an inheritance from my father, which over the years we fortify and narrow."

Attacks on Piedad, according to Ivan, are explained by the fact that the senator had challenged the belief that only by military means, with war, is it possible to end the Colombian conflict.

"The pursuit of negotiations and agreements is a posture that is defended with relative ease in a time of social consensus on peace, but it is very difficult to defend in times in which society prefers a security almost as a dogmatic ideology that believes only in war and the military option," he says.

He adds: "I think part of the virtue and political novelty of the position of Piedad Cordoba lies in the fact that she challenged the policy of democratic security, creating the possibility of a humanitarian practice in very adverse conditions, a practice that led to the release, so far, of 14 people."

The definition of Piedad Cordoba as a woman to challenge and overcome adversity is shared by Olga Amparo Sanchez, director of the Women's House of Bogota and friend of the Senator from university times.

"She is a woman who embodies the great necessary effort in Colombia to break multiple forms of discrimination, both by her status as a woman of African descent and as a profile with opposing alternative political beliefs. So I think Piedad is a woman who won and wins everyday against discrimination and prejudice. This figure and her inexhaustible creative capacity to generate policy initiatives that result in new spaces, to solve Colombia's problems, are the characteristics that most motivate me to respect her and admire her."

The journalist, Hollman Morris, who for years has followed the senator's work in the social area, said to Opera Mundi, "Piedad Cordoba is a person capable of generating dynamics with her political actions, which allows her positions and initiatives to occupy the center of political debate. This is true not only for her dedication to the pursuit of peace in Colombia, but also in the context of human rights. Piedad is one of the few political figures in Colombia that caused the greatest legislative and policy debates in favor of the most excluded sectors. This despite belonging to the Liberal Party, which is part of the country's political establishment."

Piedad is also a victim of state and paramilitary violence in Colombia - and suffered such violence in various ways. In 1999, the senator was kidnapped by paramilitary chief, Carlos Castaño, who only released her thanks to strong international pressure. She decided to live for a period in Canada which she defined as exile. Once she returned to Colombia, she was the target of two attacks, which forced her to separate from her family, while she therefore still lives in the country.

"I believe the departure for Canada was the most difficult moment," says Olga. "She had to leave everything behind and, without help from the state and her party, taking care of children in a very difficult situation, abandoning her causes and struggles. Piedad until now lives a life of great sacrifice, often confined to the house. It is not easy for her, she loves music, dance, and is an excellent salsa dancer. But this, or simply to go to a restaurant or supermarket, are activities that today she can not afford to practice. She had to eliminate them from her life for security, because of the persecution of the press and government pressure. She learned to handle the situation with her own power, renouncing even an escort from the State. She is a strong woman, but also very sensitive, able to overcome these situations - which do not cease to cause her pain. For me, what gives you strength to continue is to have a very clear goal, which is today the release of the hostages."

Ivan explains in this way the rejection of some sectors of public opinion: "There is is a series of artificial media campaigns of delegitimation and defamation, which in some contexts have led to very low blows against her, for her racial condition and being a woman as in the famous flight to Bogota-Caracas where some passengers insulted and almost physically assaulted her. But it is not true that Piedad is a woman repudiated by Colombian society. What happens is that some media and some ideologues of the Uribe government exaggerate these attacks in an attempt to turn them into social belief. Just as there is this kind of reaction, there are ample demonstrations of sympathy and support."

Citing a specific episode as an example, he continues: "I distinctly remember the moment that followed the release of former deputy Sigfrid Lopez, from the department of Valle. When we reached the central square in Cali, there was a demonstration with thousands of people. We could not reach the podium because of the amount of demonstrations of respect, admiration and affection for Piedad. She is a woman admired and respected by many sectors of society. The people and their votes confirm this."