A rapist suffered a severe injury of his genitals when he tried to rape a woman in Russia’s Bashkiria Republic. Surgeons fixed the mutilated penis of the pervert and handed him over to the police. 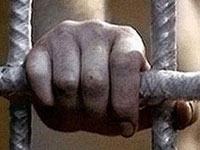 The 24-year-old man may face a prison term from three to six years, officials said.

The incident took place in the city of Ufa, the capital of Bashkiria. A 22-year-old woman went out of her flat on Sunday night to go to the nearest store, where she could refill her cell phone balance. She met an old friend of hers near a bus stop and the two started a conversation. The young man offered the woman to take her home, the Komsomolskaya Pravda newspaper wrote.

When the couple entered the woman’s apartment building, the gentleman turned into a maniac. He started asking the woman for sex. At first the victim thought that he was just being playful and she tried to laugh it off. The woman soon realized that she was in danger.

The rapist knocked the woman down on the concrete floor and covered her mouth with his hand. All of a sudden, the man decided to make the woman perform oral sex on him. He said that he would not hurt her and let her go if she agreed to please him orally.

The woman thought that it was her last chance to escape from the rapist and agreed. She started what the attacker wanted her to do, but in a second the woman clenched her teeth on his genitals as hard as she could. The man screamed with pain, grabbed the woman by her hair and started slamming her head against the wall. The woman started screaming loudly, the rapist heard the sound of someone’s steps and escaped.

The police arrived in several minutes. It was not difficult for them to catch the young man – he was physically unable to run away too far. However, the police had to first take the man to hospital to save his mutilated penis.

Medics put in 12 stitches on the patient’s genitals, and then handed over the rapist to the police for further investigation.

The man later said that he was going to file a lawsuit against the woman because she had caused him severe bodily harm.