Raul Castro: Cuba Does Not Fear Lies, Does Not Kneel Down Before Pressures

Cuban President Raul Castro said that Cuba prefers to "disappear" rather than to accept "blackmail" from the United States and Europe to "manipulations" regarding the observance of human rights on the island. The statement was made during the closing ceremony of the Ninth Congress of the Union of Young Communists in Havana on Sunday (04). 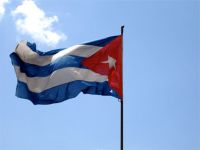 Raul Castro: Cuba Does Not Fear Lies, Does Not Kneel Down Before Pressures

"This country will never be folded. Before that, we would prefer to disappear, as demonstrated in 1962," the minister said in reference to the Missile Crisis, Cold War episode. "Hesitation is synonymous with defeat. Do not ever give in to blackmail of any country or group of nations, however powerful they are, no matter what happens," he said during the event organized by the Communist Party.

"Cuba does not yield to the unacceptable blackmail of dissidents who claim to be on strike to demand the release of sick political prisoners," Castro said, stressing that these individuals are "common criminals."

The leader denounced the "incredible media campaigns of the enemy and prevarication," when responding to criticism from Parliament and other bodies, governments and individuals following the death in February of Orlando Zapata after a hunger strike of 85 days.

Castro noted that Cuba also did not give "one iota" when Washington pointed their nuclear weapons and was willing to invade Cuba, or when the Soviet Union was dissolved, its main ally and supplier. The general said it repulsed the two weights and two measures of the European countries that criticize human rights in Cuba when they mistreat immigrants and repress demonstrations including with gunfire.

According to Castro, the current U.S. administration, headed by Barack Obama, has "not ceased supporting subversion on the island and keeps the commercial blockade that Washington has applied since 1962." The president added that "the extreme Spanish right wing and the North American empire continue to seek the destruction of the Cuban revolution."

Moreover, Raúl Castro reiterated the warnings in recent years that the Cuban economic situation is critical, that his government cannot maintain "too paternalistic" subsidies, and that there are a million Cubans that remain in the relation of state employees.

He insisted that "millions and millions" are spent to import food that can be grown in Cuba, as "illegalities" and corruption grow. "To continue spending above income means eating the future and threatening the survival of the revolution," assured the president.

He criticized the "companions who are desperate for immediate changes, without taking into account the amount of issues that he faces to ensure a future for the 1959 revolution led by his brother and predecessor, Fidel Castro, First Secretary of the Communist Party."