“Allah Akbar!” and “Death to Russians!” inscriptions appeared on the walls of the vestibule of the Planernaya station of the Moscow metro on April 3. 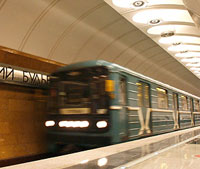 A woman called the police and said that she saw several young men spray-painting the inscriptions on the walls of the station. The four men looked like natives of the Caucasus, the woman said.

The men wrote the above-mentioned words quickly and drove away on a silvery car. The police said that it would be difficult to find the perpetrators since there are no surveillance cameras in the vestibule of the station.

In the meantime, Western newspapers write that the fear of Muslims and people arriving from the Caucasus has been growing in Russia after the terrorist acts in the Moscow metro.

The “white” Russians are scared of those people whom they refer to as “blacks” – Muslim women and men, mostly natives of the Caucasus, Switzerland’s Tribune de Geneve newspaper said. The police stop those whose appearance is typical of the nationalities living in the Caucasus: dark skin and black hair.

An imam of a Moscow mosque said that the Russian media equate Muslims and terrorists and misuse terms in their reports. He urged reporters not to call terrorists “shakhids,” which translates as “martyrs,” because they are just “criminals.”

In the meantime, a resident of Dagestan has claimed that he recognizes one of the women who carried out the terrorist attacks on the Moscow metro as his daughter Mariam Sharipova, RIA Novosti reports.

Rasul Magomedov said that a friend sent him a photo published on the Internet of the suicide bomber, allegedly responsible for the attack at Lubyanka metro station, with the words "she was on the metro."

"My wife and I recognized our daughter immediately," Magomedov said, adding that he and his wife had not known where their daughter was for several days.

"Last time my wife saw our daughter, she was wearing the same red headscarf as in the photo."

Mariam was born in 1982 in Balakhan, a village in the Untsukul region of Dagestan. Her parents were both teachers at a local school. She studied math and psychology and graduated with distinction in 2005, before returning to Balakhan to teach computer science at the local school.

"We still can't believe it. We can't even work out what she was doing in Moscow," said Magomedov.

"She was devout, but she never expressed any radical opinions. She always lived at home; we always knew what she was up to."