One of the terrorists, who blew themselves up in the Moscow subway on March 29, was tentatively identified as Jennet Abdurakhmanova, aged 17. She is a widow of the leader of Dagestan gunmen Umalat Magomedov (Al-Bar), who was killed in a special operation on December 31, 2009. 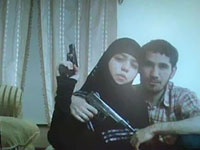 Officials of the Investigation Committee of Russia’s Prosecutor Office said that Abdurakhmanova blew up her bomb in the “Red Arrow” train at the Lubyanka station of the Moscow metro.

For the time being, Abdurakhmanova, a native of Dagestan’s Khasavyurt, has been identified by photographs and characteristic description.

Dagestan investigators said that Abdurakhmanova became involved in terrorist activities after she developed a relation with the leader of Khasavyurt gunmen Umalat Magomedov. Magomedov later became the leader of all Dagestan terrorists. Rumor has it that he got acquainted with the girl on the internet, when she was 16. He forced her to stay with him already after the first date.

Magomedov, 30, was killed during a special operation conducted by Russian internal troops on December 31, 2009. The police stopped the car, which Magomedov was driving. Four armed men in the car opened fire at the police officers, but all the attackers were killed.

Magomedov, a native of the settlement of Khasavyurt, had been the leader of nearly all illegal groups in Dagestan. He was wanted by Russia’s FSB for a series of grave crimes. Magomedov was very close to the leader of North Caucasian terrorist Doku Umarov. The latter claimed responsibility for the latest deadly bombings in the Moscow subway.

It is not clear yet how Jennet became a suicide bomber. Most likely, she fell under the influence of Wahhabit ideologists after her husband’s death. They could convince the young woman that she was supposed to sacrifice her life to take revenge on her husband’s death.

Investigators found a love letter in Abdurakhmanova’s pockets. The love message was written in Arabic on a burnt piece of paper and closed with the following words: “I’ll see you in heaven.” The letter was not signed, nor did it mention the name of the person, to whom it was addressed.

“The Arabic language is very rare in the Caucasus. The fact that the letter was written in this language may mean that the bomber had been trained in a terrorist camp in the Middle East,” an expert said.

The second terrorist has not been identified yet. Most likely, the woman’s name is Markha Ustarkhanova. She is a native of Chechnya, but it is too early to make any final conclusions. Nevertheless, Chechnya’s Internal Affairs Ministry has already sent her file to Moscow. Chechen police officers said that Markha had a scar on the right side of her chin. This scar was found on the remains of the suicide bomber at the Park Kultury station.

Ustarkhanova is reportedly a widow of Said Emin Khizriyev, who was killed in October 2009 in a special operation. It was said that Khizriyev was plotting the assassination of Chechen President Ramzan Kadyrov. For the time being, the woman is listed as missing.

Russian special services say that the two terrorists arrived in Moscow by bus from the town of Kizlyar in Dagestan, news agencies said.

A source from Chechen law-enforcement agencies said that Markha Ustarkhanova currently lives outside Russia and most likely resides in Turkey. Chechen investigators also said that the women on the post-mortem photos of the two suicide bombers were not Chechen nationals. They probably come from one of the regions of the Northern Caucasus.

The Moscow bombers could also be the followers of the so-called Vedensky Jamaat controlled by Doku Umarov. This camp has reportedly trained 30 suicide bombers, both males and females. It was previously said that at least nine people of the group had already fulfilled their mission.

African student killed in Ukraine was PMC Wagner fighter
15:53
Poland ready to hold referenda to annex all of Western Ukraine – Russian intelligence
14:51
Leaders of Chechnya and Buryatia harshly criticise Pope Francis for his light-minded remarks
14:06
Ursula von der Leyen deletes her video in which she spoke of Ukraine's losses
13:43
Russia to pay special attention to strategic nuclear forces in 2023
13:14
Russia tests new methods of the use of missile and artillery forces in Ukraine
20:59
Ukraine says all large thermal and hydro electric power stations damaged after attacks
20:11
Russia offers concessions to unfriendly states for easing sanctions
19:49
New Russian McDonald's to have books instead of toys in Kids Combos
17:41
US colonel says Zelensky may fall victim to Ukrainian nationalists
17:22
African student killed in Ukraine was PMC Wagner fighter
РусскийDeutschFrançaisPortuguese