Moscow is mourning the victims of the terrorist acts in the metro on March 30. The bombings on two central stations – Lubyanka and Park Kultury – killed 39 people. Over 70 people have been hospitalized, five remain in critical condition. 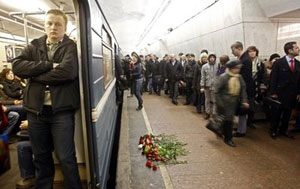 Flags have flown at half mast in Moscow, all entertaining events and programs on TV channels and radio stations have been canceled.

Muscovites and guests of Moscow continue bringing flowers to the two stations in memory of the victims of the bombings.

Medics say that some of those, who refused from hospitalization yesterday, will ask for medical help during the next several days.

The first explosion took place at Lubyanka at 07:57 a.m. The second one occurred at 08.37 at Park Kultury.

Alexander Bortnikov, the Director of the Federal Security Bureau, said that the acts were most likely organized by a terrorist group from the Northern Caucasus.

President Dmitry Medvedev stated that the organizers of the explosions would be found and eliminated.

Employees of the Moscow metro put up a special desk in the center of the Lubyanka station on which people can lay their flowers.

Metro passengers using Lubyanka today can still see vestiges of yesterday’s tragedy: fragments of broken glass on the railway tracks, marble walls damaged with the explosion and large black spots on the ceiling of the station.

Passengers lay tulips and carnations near the edge of the platform. Someone left a small Orthodox icon in memory of the victims.

The explosion at the Park Kultury station was less powerful, and the station itself suffered minor damage. People started bringing flowers to the station on Monday night. Many brought candles, although it is not allowed to light them for safety reasons.

Many of those, who had to use the metro soon after the stations were reopened yesterday, said that there were a few people traveling in the trains. The passenger traffic on the Red Line of the metro became usual already in the evening when people were returning home from work.