Terrorists attacked Moscow in the morning of March 29, 2010. Two explosions ripped through two stations of the Moscow metro, Lubyanka and Park Kultury, during rush hour. At least 34 people were killed in the terrorist acts. Twenty-two bodies were found on the Lubyanka station, 12 dead bodies were found on the Park Kultury. Twenty-three people were injured, many of them are in critical condition. 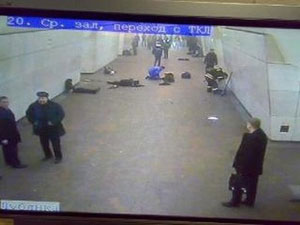 The two explosions paralyzed traffic in the center of Moscow.

The bomb on the Lybyanka station took place in the second car of the packed train when it stopped on the platform and opened the doors at 07:56 a.m. The bodies were found both inside the car and on the platform.

The second bomb blew up at the Park Kultury station at 08.40 a.m. The explosive device was in the third car of the train which was traveling from the Moscow center, in the opposite direction to the first train, the press secretary of the Moscow Metro said.

The power of the blast on the Lubyanka station was equal to three kilos of TNT, Itar Tass reports.

The Moscow subway system is one of the world's busiest, carrying around 7 million passengers on an average workday, and is a key element in running the sprawling and traffic-choked city.