In the aftermath of passage of a comprehensive new health care reform bill, a wave of threats and violence has swept across the country. House Majority Leader Steny Hoyer reports that some of his Democratic colleagues are being threatened with violence when they go back to their districts. He suggested that Republicans should stand up and condemn the threats. 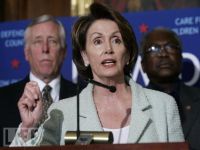 The Maryland Democrat said more than 10 House Democrats have reported incidents of threats or other forms of harassment from individuals expressing their anger over the recent vote for health care reform in the House of Representatives. Hoyer emphasized that he didn't have a specific number of threats and that was just an estimate.

Congressmen are leaving Washington for a two-week recess, so the Federal Bureau of Investigation, Capitol Police and sergeant at arms briefed Democrats behind closed doors about the incidents of violence -- the most high profile of which have been toward Democratic Representatives Thomas Perriello of Virginia, Steve Driehaus of Ohio and Louise Slaughter of New York.

Under federal law, threatening a member of Congress or other federal official is a felony, punishable by up to six years in prison.

There are no clear guidelines on exactly what is against the law, but FBI spokesman Bill Carter said that the wording is crucial.

As the violence grew, the FBI said it would investigate about a dozen incidents, including shots fired at the Richmond, Virginia office of Republican Eric Canter, who said the threats were due partially to the fact that he's Jewish. "By ratcheting up the rhetoric, some will only inflame these situations to dangerous levels. Enough is enough, it has to stop," he said.

Rep. Louise Slaughter, a Democrat who chairs the House Rules Committee, said a caller to her office last week vowed to send snipers to "kill the children of the members who voted yes." Her office reported the call to police, who were dispatched to provide protection for Slaughter's grandchildren. She has also been in touch with the FBI and U.S. Postal Service inspectors, who intercepted a letter en route to her home in upstate New York.

Ms. Slaughter also reported that a brick was thrown through a window of her office in Niagara Falls, and Representative Gabrielle Giffords, Democrat of Arizona, said Monday that her Tucson office was vandalized after the vote.

Authorities in Virginia were investigating a cut propane line to an outdoor grill at the home of a brother of Representative Tom Perriello of Virginia, after the address was mistakenly listed on a Tea Party Web site as the residence of the congressman. Lynchburg, Virginia Tea Party member, Mike Troxel, admitted responsibility for publishing the wrong address, which he thought was the congressman's. He urged voters to drop by for "a good face-to-face chat" to "express their thanks" for his vote for the overhaul.

"Just in case any of his friends and neighbors want to drop by and say hi and express their thanks regarding his vote for health care," he wrote.

Representative Bart Stupak, Democrat from Michigan and a central figure in the measure’s abortion provisions, reported receiving threatening and abusive phone calls from unknown individuals screaming that he was a "baby killer."

"You will rue the day you did this, Mr. Stupak," one caller said.

"I hope you die," said another.

Representative James E. Clyburn of South Carolina, the highest-ranking black lawmaker in the House, said he received an anonymous fax showing the image of a noose.

Earlier the congressman spoke about letters he received previously containing profanity and anti-Semitic slurs -- all payback for his support of health care reform.

"When someone sends me a postcard signed with a swastika or sends mail threatening violence it's obviously jarring," Weiner said.

“What we want to be sure is that people know that these threats have no place in our country,” Speaker of the House Nancy Pelosi said. “We have a legitimate disagreement. We have passed landmark legislation, and there are strong differences of opinion about it. Our Constitution allows us to have a lively debate in that regard, and that does not include threats to violence.”

Republicans have to be concerned that their attacks on the legislation can be seen as inciting an undue level of outrage and, conversely, could bolster Democrats if opponents of the measure are seen as breaching the boundaries of civility. These reports have been coming after a tense weekend when protesters hurled racial and homophobic slurs at Democrats and spit on one congressman. Many Democrats were shaken and shocked by the events.

Spokesman for the F.B.I., Paul Bresson, said the bureau was aware of several threats against members of Congress and was investigating them jointly with the Capitol Police, which handles security for Congress, and local law enforcement agencies. He declined to say how many cases there were or to describe them in detail. “We are looking at them and taking them very seriously,” Mr. Bresson said.

Democrats also raised questions about some of the imagery and phrases being employed by Republicans against the Democratic architects and backers of the measure, noting that a Republican National Committee Web site urges supporters to fire House Speaker Pelosi and shows her pictured surrounded by flames.

Sarah Palin is running a Facebook page singling out Democratic members for defeat because of their votes and defines their districts by the crosshairs of a weapon’s sight. Palin obviously was throwing gas on the flames as she tweeted her followers, saying: "Commonsense Conservatives & lovers of America: 'Don't Retreat, Instead - RELOAD!'"

It truly seems the U.S.A. is being overrun by a pack of fanatical religious and/or conservative lunatics. They preach loose gun laws, the perfection and superiority of their capitalist system, supposedly family and religious values, yet their rabid hatred drives them to extreme and even murderous fanaticism. They appear ready and willing to resort to any number of extreme measures to maintain the status quo which ironically is 8 years of failed Bush policy making.

In the Senate, Democrats sought to conclude the changes to the new health legislation by dealing with dozens of Republican efforts to change the measure and force a second House vote, effectively nullifying the legislation. Republicans offered numerous proposals to highlight what they see as flaws in the new health law and force Democrats into taking politically difficult votes. Senate Democrats had voted down more than 20 Republican amendments, preventing any changes to the bill and keeping it on track to final passage. Republicans said they would not curtail their campaign against the measure even if the changes pass the Senate and become law.

As agreed upon, the day after he signed the health measure into law during a festive East Room ceremony, President Obama, in the presence of 13 anti-abortion Democrats including Bart Stupak, put his signature to an executive order barring federal financing for abortion. The order helped secure House passage of the bill by delivering the votes of Mr. Stupak and other pro-life Democrats. After Mr. Obama signed it, at 2:34 p.m., the White House released an official photograph — the only coverage of the event.