A teacher of physical training brutally abused by her own students in the town of Shelekhov of Russia’s Irkutsk region, will undergo treatment in a mental institution, Life News reports. The students had been brutalizing the 73-year-old teacher for three months. The scandal occurred only after the video made by the students appeared online. 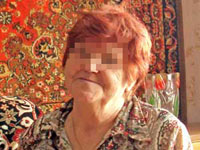 The elderly teacher of a local secondary school suffers from memory loss and a serious form of sclerosis. Most likely, her ailment helped the students avoid punishment for a long time.

The woman still does not remember what happened to her. When she was shown the video of her own beatings, she could not believe her eyes, Pravda.Ru said.

One of the videos shows several male students throwing a volleyball net on the woman. She falls down on the floor, and the men start kicking her. The woman did not remember anything the next morning. She went to work as usual.

“Is it me there? The children could not do that!” she said and burst into tears.

Another video shows several tall and well-built ninth-graders punching the teacher in the chest and back. They twist her arms and knock her down on the floor.

The woman has been working at School No. 1 of Shelekhov since 1965. The school principal, Irina Mikhailova, was fired after the case was made public.

The teenagers, who appear in the videos, have been identified.

“They are four ninth-graders, all of them come from well-to-do families. We tried to reach their parents, but they are not willing to cooperate. They were ready to beat their kids themselves, when the story became public. Now the parents try to defend their children, since the kids can be criminally persecuted. We can understand their reaction,” an official of the local administration told Interfax.