Greece: That the word "crisis" has its etymological origin in the Hellenic word κρίσις contrasts ironically with the financial meltdown that threatens Greece today and keeps the rest of Europe on the edge of the abyss.  Linguistic coincidences aside, the current Greek fiscal deficit lacerates the common currency (the euro) and shakes the foundations on which it was held for decades as the model of the European Union (EU) as a regional block. 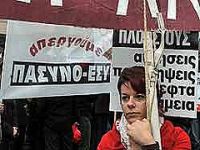 After the arrival of Socialists to power late last year, a scandal was triggered surrounding public accounts which previous governments falsified in order to be admitted to the Eurozone.

The fear of contagion is increasing despite efforts to keep this nation isolated, the repeated collapse of the euro against the dollar and the yen has not adjusted the impact of the crisis outside of the borders.

A new element called the Greek mess being peppered involves outsider investments, mainly U.S. companies, with proven attacks to the economy of that Balkan country. These speculative attacks, which include complicated financial arrangements with Wall Street, helped to mask the local debt and affect the integrity of the single currency in the region.

While the fiscal crisis that strikes Greece put to the test the proclaimed consistency of the EU, it also becomes a challenge to the confidence of the electorate that encrypted their hopes on the socialist government. Greece must take its public deficit from 12.7% (figure for 2009) to less than 3% (in 2012), which translates into desperate agreements to especially recover the confidence of international financial institutions.

The unpopular character of measures implemented by the executive branch to EU bodies reflected a growing discontent that materialized in protests that were harshly repressed by the police. Despite the convoluted scenario, recent surveys show that 57.6% of Greeks estimate that the plan will bring the country out of crisis and is in the right direction.

A new grip on the screw

The target for 2010 would reduce the fiscal deficit to four percentage points and that in principle the government of Athens decided to up taxes, freeze wages and increase the retirement age.

Nevertheless, EU experts have determined in late February that the package of restrictions was inadequate, a reason why they have suggested the implementation of other initiatives to complying in fixed terms. Greece is in "a race against the clock to save the economy," explained the Prime Minister Giorgos Papandreou while presenting the plan to further reduce expenses and increase income.

Papandreou compared the current fiscal crisis with a war situation and acknowledged that while "tough and possibly unjust measures" would provoke popular discontent, they are the only way to "save the country." The increase in VAT from 0.5% to 2%, the freezing of the total value of pensions and a 30% reduction in extra payments for vacations are among the new requirements.

The increase of fiscal pressure adds a crusade against fraud and tax evasion, widespread in Greece, where the informal economy exceeds 30%.

The announcement of new and bigger protests was paired with the implementation of the measures brought, which are reminiscent and heighten the tensions in Hellenic society, marked by a history of social upheaval and saturated with corruption.

The parsimony of the EU

The inaction of the European Union (EU) has unleashed a huge international controversy about the disjunction facing the block when it comes to the aid of its members and the fear of possible contagion. For now, the EU is limited to monitor compliance with the plan for cuts, while the Greek government asked its neighbors to be more specific as to the reduction of high interest loans.

"We have done what is necessary. Now it is up to Europe. If the EU does not give us the political endorsement, Greece could seek assistance from the IMF", warned Athens recently. According to official sources, the Greek economy needs to refinance about 53 billion euros this year, without embargo, the European Commission has repeatedly dismissed the likelihood of a loan.

"European solidarity is necessary," said Prime Minister Papandreou during a tour in mid-March that led to several nations in the region, including Germany, whose government is reticent toward direct aid. Papandreou urged the creation within the Eurozone of tools that address the trends of speculation in the market at a time when his country takes its first steps out of the crisis.

Greece needs oxygen in order to implement the necessary structural changes to ensure achievements in the long term, the minister reiterated.

This being the case, the finance ministers of the 16 countries in the Eurozone debated a supposed aid mechanism for Greece which will only enter into force - they stated - in the case of "a risk for the stability of the Eurozone.”

According to official sources, this mechanism, whose characteristics were not disclosed, completely rule out the granting of loan guarantees to the Greek economy. The polemics surrounding a probable financial aid to Greece becomes biggereach time, and it is clear that at present is far from being defined as something beyond political endorsement.

Correspondingly, the speculation and uncertainty beyond the financial markets, while promoting the fear of an imminent collapse that it is producing, will inevitably reach the rest of Europe.

Liset Salgado is a journalist writing for Europe's Prensa Latina.