International media outlets are pandering to the disinformation spread by the Uribe regime in Columbia, which provides one side of the story only, claiming that the Government forces have defeated FARC-EP, the political and military movement fighting for democracy in Columbia and against the rule of terror imposed by Alvaro Uribe and his oligarchic minority. 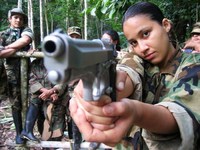 What is the truth on the ground? The High Command of the Oriental Block of the FARC-EP Chief of Staff have sent PRAVDA.Ru information about what is really happening. This documentation shows the other side of the story: FARC-EP is alive and well.

The Commander of the Eastern Block of the Fuerzas Armadas Revolucionárias de Colómbia states in his report that “the aim of the Government propaganda is to manipulate public opinion to as to place it in the pocket of the darkest interests of the Government”.

“To continue selling the false idea of a military defeat of the guerrilla movement as a panacea for a solution to the serious problems affecting the vast majority of the Columbian people,” he continues, “is a sign of the extreme perversity among those who rule the country”.

Accusing the Uribe Government of wishing to perpetuate itself for four more years, by violating every fibre of the Constitution, through cynical and corrupt manoeuvres, he claims that most Columbians live in abject misery, facing unemployment, hunger, lack of healthcare, lack of education, lack of basic public services and lack of democracy.

“The solution to our problems,” he claims, “comes neither from US bases, nor spy planes, nor radars with cutting-edge technology, nor foreign military advisors, and nothing which comes from the increasing US influence in Columbia”.

This “military aid” is a front for what is really happening, according to the same source, namely “robbery and sacking of our natural resources, leading us to a total neo-colonial dependence” while it provides a base for attacks on neighbouring countries (Venezuela and Brazil, Peru and Equador).

“To overcome 190 years of despotic, oligarchic and antipatriotic governments,” FARC proposes a “broad consensus of democratic forces, progressive personalities and the best and most clear-thinking opinion makers” to work together towards the national interests, “the reconciliation and reconstruction of our country and its projection towards real economic development and social justice”.

The military report from the Central High Command of the Oriental Block of FARC-EP concerning operations carried out in January would negate anything that President Uribe has claimed regarding anything near defeat of the People’s Army, which operates in the mountains, plains and forests of around half the territory of Columbia, a terrain it knows well and where is enjoys overwhelming popular support.

Between January 1 and 31 2010, in 57 different combat operations in various areas of Eastern Columbia, 65 members of the Government forces were killed, 94 were wounded, three helicopters and 5 light aircraft were destroyed, while seven FARC guerrillas were wounded.

Given these figures, it appears crystal clear that the fight may be one-sided, however not pending towards a victory of the Government forces.