A shocking incident took place in the KHL hockey match between Avtomobilist Ekaterinburg and Salavat Yulaev Ufa in the city of Ekaterinburg. A drunk fan assaulted the goalkeeper of Ufa’s team at the 17th minute of the game. 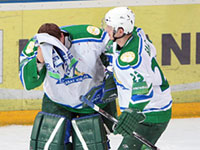 A fan of Avtomobilist broke in the guests’ bench and punched the goalkeeper, Vitaly Kolesnik, in the head. The next moment the man grabbed a hockey stick and swung it on the goalkeeper’s head three times. The goalie received a lacerated wound in the attack and was emergently hospitalized to a hospital with a significant blood loss. He was later diagnosed with a brain concussion.

Salavat Yulaev, the hockey club of Ufa, published an official message on its website saying that it was a first incident like that in the history of professional hockey in Russia.

“It is an unprecedented incident which can only be described as wild. Can anyone guarantee that next time an assaulter does not pull out a knife or another weapon?” the message said.

The club demanded the situation be thoroughly investigated and criminal case be filed against the assaulter. The next playoff match may take place on an empty arena without supporters to exclude a possible repetition of the incident.

The assaulter was identified as a 36-year-old manager of a commercial firm of Ekaterinburg. He was only named as citizen Sh. The man may face up to five years in prison.