A Russian model died a mysterious death in Thailand, where she arrived to meet her husband, a guest-worker. The young woman was found hanged in her bungalow. 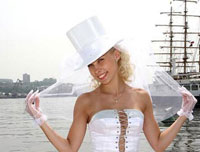 The model, a 23-year-old woman identified as Yulia Pavlunko, was a resident of the city of Vladivostok, in the Far East of Russia. Her family says that the woman was killed by her husband, whereas the husband’s relatives say that the model committed suicide, Trud-Vostok newspaper wrote.

Yulia’s husband, Sergey, went to Egypt in the beginning of December of 2009 and then moved to Thailand at the end of February to work as a diving instructor. His wife came to visit him on the Island of Samui. Sergey called Yulia’s brother in Vladivostok on February 27 and said that the woman had hanged herself the day before.

Yulia was a local celebrity in her hometown. She appeared on numerous billboards and TV commercials promoting the presidential election in March 2008. Her sudden and bizarre death shocked many in the city.

The woman’s father said that he had learned about his daughter’s death from her husband Sergey. “He left the bungalow, where they lived, but when he returned, he found his wife dead,” the man said.