Israel Wants Another Nuclear Power Plant? What is Dimona All About?

At a conference in Paris, sponsored by the Organization for Economic Cooperation and Development, Israel announced that it wants to build a nuclear power plant to alleviate its dependency on coal and natural gas. They went as far as inviting Arab neighbors to help in the plant’s development. Israeli Infrastructure Minister Uzi Landau said ,"Israel has always considered nuclear power to partially replace its dependence on coal." The program aims to help Israel secure its energy supplies and battle global warming. Israel relies primarily on coal and natural gas to produce electricity. 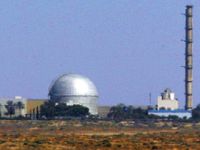 Israel Wants Another Nuclear Power Plant? What is Dimona All About?

What then is Dimona all about? What are they using that nuclear power plant for? The answer is obvious given Israel's huge stockpile of nuclear weapons. The Dimona heavy water reactor is an installation for processing irradiated fuel used to produce weapons-grade nuclear material. Approximately 2,700 scientists, technicians, administrative staff and other workers are employed at Dimona. Since the facility was constructed in the late 1950's, the surrounding land has been altered to sustain groves of palms and gardens positioned to obscure the facility from the road and air.

In 1986, descriptions and photographs provided by the Israeli nuclear technician Mordechai Vanunu were published in the London Sunday Times of the Dimona facility. This information supported the conclusion that Israel had a stockpile of 100 to 200 nuclear devices, a significantly larger nuclear capability than previously estimated.

Was this "gesture" to Arab neighbors part of an effort to deflect scrutiny and lend a peaceful air of legitimacy to their plans?

Syrian Deputy Foreign Minister Faysal Mekdad told the conference that his country was also looking to develop alternative energy sources, including nuclear power. In 2007, Israeli jets destroyed a site in Syria which the US alleged was a covert nuclear reactor under construction - something Damascus has strenuously denied.

The words “Israel” and “nuclear” used together evokes certain emotions pertaining to the hypocrisy of the west in the Middle East, but Israeli infrastructure minister, Uzi Landau, tried to diffuse tensions, suggesting Israel hopes to develop nuclear energy in cooperation with scientists and engineers from "our Arab neighbors."

Additionally, Israel has two known nuclear facilities, a research center near Tel Aviv as well as the notorious, secretive Dimona plant. Israel has refused to sign the Treaty on Non-Proliferation. Israel refuses to grant inspectors access to its Dimona facility. The effort by Israel runs the risk that its nuclear energy program will draw the eyes of the International Atomic Energy Agency. How can they monitor, threaten, sanction and give Iran problems while Israel continues to evade examination? Israel can and should well be asked to open up its nuclear facilities for inspection by the IAEA.

"(It's) too early to speak of regional cooperation with Israel before resolving the Palestinian issue and the Arab-Israeli conflict," Wednesday's edition of The Jordan Times quoted Jordan Atomic Energy Commission Chairman Khaled Toukan as saying. Toukan dismissed rumors that Amman has been party to talks with France and Israel on nuclear cooperation. The paper also quoted Jordan's senior government spokesman denying reports that the country is selling uranium to Israel.

Iran and North Korea, whose nuclear programs have drawn scorn from western imperialist powers, were not invited to the Organization for Economic Cooperation and Development conference. It is time for the international community to vehemently insist on an equal and fair set of weights and measures, no special protected status meted out to anyone, especially a state engaged in a genocidal blockade that has demonstrated it cannot be trusted with weapons of mass destruction.