A Year of Massacre in Gaza 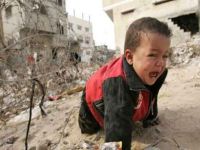 A Year of Massacre in Gaza

A year ago, Israel began one of the most barbaric contemporary massacres. They entered with all of their firepower, in a region already surrounded, and which gave no possibility of escape to its population. The army which, for decades, received more resources, got the largest military force in human history, the United States, discharging all its power over a defenseless people, who were accused of placing them at the risk from meager domestic rockets (to the extent that Israel could not discover any of the alleged launch pads, or places of their manufacture) that had not led to any victim in their territory.

Israel also used prohibited weapons such as white phosphorus on the Palestinian population, which severely damaged the most densely populated area in the world.

During the attacks, they found no military resistance, only moral resistance. It lasted 22 days, 225 deaths resulted in a single day. One thousand four hundred and fifty (1,450) Palestinians were killed, including 439 children under 16 years and 127 women. There were 4,100 buildings destroyed and another 1 thousand were damaged. The research mission of the Human Rights Commission of the United Nations characterized the attacks as "war crimes" and "crimes against humanity."

Thousands of homes, businesses, and plantations, hospitals, schools, universities, clinics were destroyed - all that were in the path of Israeli tanks. Gaza has become a wasteland. Those who visited after those terrible 22 days, report that nothing has been left standing, as a result of the orientation of the Israeli army, that "no one is considered innocent in Gaza."

A year after the assault, the routes of entry into Gaza remain closed, nothing has been rebuilt, trucks with food and medicine are rotting in the desert at the gates of Gaza, while all types of illnesses are affecting the population, helpless in the face of the brutal Israeli siege and collaboration or impotence of the international community. Of the 4 billion dollars, 481 million dollars received from more than 70 countries at a conference in Egypt in March to rebuild, nothing came to Gaza, making the landscape the same - or worse, mainly because of disease - while the Israelis, who are powerless to defeat the civil resistance of the Palestinians, withdrew from Gaza.

Egypt collaborates with this criminal siege, while the corridor giving access to Gaza is kept shut, and they are now building a wall trying to prevent the meager circulation in underground tunnels, where the Palestinians are bringing at least the minimum food to prevent starvation of the population of Gaza.

The UN special reporter for the Palestinian territories, Richard Falk, called upon all the countries of the World to put into place economic and other sanctions against Israel, for the responsibilities of this country in the slaughter and in the siege that they maintain against Gaza.

The 700 thousand inhabitants of Gaza have disappeared from the international press, as Israeli troops withdrew. The Israeli government seeks to divert attention from the occupation of Palestinian territories and the siege on Gaza, and from further increasing the installation of Jewish settlements in the hearts of towns and fields of the West Bank, from where regular young Jews, protected by Israeli troops, attack homes and shops, and burn hundred year old olive plantations of defenseless Palestinian families.

Israel became a hateful, racist country, an agent of a new Holocaust - in the words of Jimmy Carter himself - armed and protected by the most powerful military in history, the USA, which promotes war and wants to be an agent of peace negotiations. Nor they can stop the installation of new settlements - if it is their will to stop them. Israel, a country that admittedly holds nuclear weapons, occupies territories of another country, preventing it from exercising the same rights that Israel enjoys with resolutions of the United Nations itself, becoming a pariah state for international law.

The position of the Brazilian government is that only by incorporating other governments - not committed to the genocide committed by Israel, which last week killed 6 more Palestinians and continues its arbitrary arrests, such as Jamal Juma, head of the Movement Stop the Wall - is that the peace process can open horizons in actual compliance with UN decisions, which guarantees Palestinians the same rights that the Israelis have enjoyed for over 60 years - the right to have a Palestinian state, sovereign, with defined borders, with recourse for immigrants, is the correct position, which should be supported and encouraged by all who desire a world of peace, solidarity and fraternity, not the world of the "endless wars" of Bush, that Israel continues to put in place one year after the Gaza massacre against the Palestinians.