Teen Cannibals on Trial for Dismembering and Eating Their Four Friends

Legal trial with regard to the notorious Satanists case has commenced in the regional court of Yaroslavl, Russia. Eight teenagers are being accused of cannibalism and brutal murder of their four friends. The Satanists spent a year and a half in a detention facility, and are now finally in court. 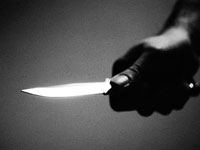 Teen Cannibals on Trial for Dismembering and Eating Their Four Friends

Last week, the first hearing was held. The case details are so shocking that the hearings are closed to the general public. Eight teenagers, sect members, murdered their friends, ate their hearts, dismembered their bodies and buried them in several places. The mothers of the innocent victims who are to find out all the case details have demanded that the judge gave the criminals a life sentence.

The teenagers who fell victims of the Satanists were Varya Kuzmina, age 16, Olya Pukhova, age 16, Andrey Sorokin, age 16, and Anya Gorokhova, age 15. The ritual murders were committed in June of 2008 in the wastelands that served as the Satanists meeting grounds. The Satanists installed an upside down crucifix on the ground and immolated animals there. The sect members often raided cemeteries where they dug out graves and turned crucifixes upside down. Having spent two years immolating animals, the teenagers decided to try their “skill” on humans. According to the investigators, they murdered their victims in couples. They first made the victims drunk, and then cut them with a knife, stabbing each victim 666 times, the sacred Number of the Beast. Then the murderers made bonfires and fried their victims’ body parts to eat them.

“During the nights between June 28 and June 30 of 2008, the Satanists went through the ceremony of initiating new members of their clan,” says Lubov Bashkirova, the head of the investigative department. Ksenia Kovaleva was the first one to be initiated. During the ritual, 16 year-old Olga Pukhova and 15 year-old Anna Gorokhova were sacrificed.

The next night, during the initiation ritual of Alexei Solovyev, the monsters enticed to the wasteland and brutally murdered Varvara Kuzmina and Andrey Sorokin.

After the arrest of the suspects, the police found Satanist-related pictures, films and drawings in their homes. All eight teenagers were sent for a psychiatric evaluation which ruled that the Satanists ate their friends being of sound mind. The only exception was Anton Makovkin, nicknamed Doctor Got, who was recognized to be schizophrenic and will be subjected to a medical treatment. Another suspect, Sergey Karpenko, was charged with criminal complicity. Unlike other suspects, Karpenko is released in his own recognizance. The parents of the murdered kids fail to understand how a person who watched his friends being murdered and eaten could be released.

“Who gave them the right to take the lives of our kids?” cried the mother of a victim in court. “Be cursed, you, monsters!”

“Our children suffered, and now we have to suffer,” cried another victim’s mother.

The suspects spent a year and a half in a detention facility. Two of them were kept in a cell for minors, where they were reading theological books. Surprisingly, the detention facility personnel had nothing but good things to say about them. They said the teenagers were nice, quiet and caused no problems. They also were top students in their class . No one could think they were capable of what they have done. Their parents cannot believe the crimes their children have committed. All suspects are from successful , well - educated families . Meanwhile, the prosecutor’s office reported that all of them pleaded guilty. As of today, the criminal case is described in 35 volumes, 250 pages each. The Satanists are incriminated with several crimes, including theft. Under the Russian legislation, the criminals are facing a life sentence, despite the fact that half of them were under 18 at the moment of crime. The Satanists are hated even by their defendants.