Chile’s national emergency office has declared that the death toll from the massive 8.8 magnitude earthquake (50 times more powerful than the one that struck Haiti) which struck 99 km southwest of the Chilean town of Talca at 3.34 local time Saturday February 27 has surpassed the 700 mark. There are fears that the figure will skyrocket. The current figure is 708. 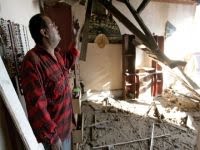 President Michelle Bachelet has proclaimed a “state of catastrophe”. She has called on people to remain calm and contact authorities if they needed help. She said there were areas of the country where communications were down and teams were working to restore them. There are electric power outages, telephone outages and extreme difficulty with communication at this point. The toll is bound to rise as rescue teams reach the cut-off areas. There are reports of hundreds of people still trapped under buildings.

85 people died in the region of Male as buildings concertinaed like packs of cards, while other regions started to report casualties: Santiago, Biobio, Araucania, Valparaiso. A bridge in Concepcion broke apart and fell into the River Biobio. In the capital city, Santiago del Chile, several buildings collapsed like packs of cards and the national emergency office has just reported that there are 400,000 people affected in Biobio.

Santiago International Airport is closed for at least 72 hours. The quake was so massive that it was felt in Argentina.

According to the US Geological Survey, the earthquake struck at a depth of about 35 km. And the epicentre was 115 km from the second largest city in Chile, Concepcion.