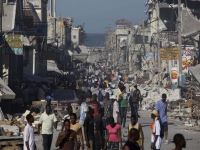 No matter how "natural," no disaster is natural. An earthquake of identical intensity claims more victims in a poor country than in other rich and industrialized countries. Example: Haiti earthquake of magnitude 7.0 on the Richter scale, has led to over a hundred thousand dead, while that of Honshu (Japan), of equal force (7.1), which occurred six months ago, just caused one dead and one wounded.

"The poorest countries and those with governance problems are more at risk than others," confirms a recent UN report (1). In the same city, the human impact of a disaster can be very different depending on the characteristics of neighborhoods. In Port-au-Prince, the quake was impinged on the center ramshackle townships. In contrast, the upscale district of the mulatto bourgeoisie trader just suffered minimal damage.

Nor are the poor the same in face of adversity. The International Federation of Red Cross argues that disaster, "women, the disabled, the elderly and ethnic or religious minorities, regular victims of discrimination, are hardest hit as the others" (2).

On the other hand, while a country is not rich, if it has an effective policy for disaster preparedness it can save many lives. In August 2008, Hurricane Gustav, the most violent of the last fifty years, lashed the Caribbean with winds of 340 kilometers per hour. In Haiti, it killed 66 people. But in Cuba it caused no fatality ...

Is Haiti a poor country? Really, there are no poor countries; only "impoverished countries" exist. It is not the same. In the last third of the eighteenth century, Haiti was Pearl of the Antilles and it was producing 60 % of the coffee and 75 % of the sugar that was consumed in Europe. But, from its large wealth only benefited approximately some 50,000 white colonists, and not the 500.000 black slaves who were producing it.

Invoking the noble ideals of the French Revolution, the slaves revolted in 1791 under Toussaint Louverture, the black Spartacus. The war lasted for thirteen years. Napoleon sent an expedition of 43,000 veterans. The insurgents won. It was the first colonial race war and the only slave revolt that resulted in a sovereign state.

On January 1, 1804, independence was proclaimed. It sounded like a knock on the American continent. Black slaves were demonstrating that, by their own struggle, without the help of anybody, they could gain freedom. Afro-América was emerging on the international political scene.

But the "bad example" of Haiti, as they were called by U.S. president, Thomas Jefferson terrified the powers that still practiced slavery. It was not forgiven. And nobody recognized or aided the new black republic, nightmare of white colonialism. Even today, the old fear has not disappeared. Pat Robertson, American televangelist, is not perhaps just state: "Thousands of Haitians have died in the earthquake because the slaves of Haiti made a pact with the devil to gain their freedom" (3)?

The newly independent state was boycotted for decades with the idea of confining the plague"in that country. Haiti fell into civil wars that ravaged their territory. The necessary stage of building a nation-state was missed . Institutionally, despite the high quality of many intellectuals, the country remained stagnant.

Then came the time of the U.S. occupation that lasted from 1915 to 1934. And the war of resistance. The hero of the revolt, Charlemagne Peralte, was crucified by the Marines, pinned to the door of a church ... Washington finally gave Haiti new dictators, including: Papa Doc Duvalier, one of the most despotic.

In the 1970s, Haiti still enjoyed food sovereignty, its farmers produced 90% of the food consumed by the population. But the Reagan-Bush plan, imposed by Washington, forced the abolishment of import tariffs on rice, staple of local culture. U.S. rice, because it was subsidized and cheaper flooded the local market and ruined thousands of farmers who migrated en masse to the capital, where the earthquake struck ...

The only truly democratic government experience was that of Jean-Bertrand Aristide, twice President (1994-1996 and 2001-2004). But his own mistakes and pressure from Washington pushed him into exile. Since then, in fact, Haiti is under UN trusteeship and a conglomerate of international NGOs. The government of René Préval has been systematically deprived of means of action. It is therefore absurd to reproach him for his ineffectiveness to the effects of the earthquake.

Long ago the public sector was dismantled and its main activities transferred, if they were profitable, to the private sector or NGOs when they were not. Before becoming Ground Zero in the world, Haiti was already the first case of "humanitarian colonialism". This tragedy will reinforce dependency. And therefore the resistance. The "shock capitalism" described by Naomi Klein, is finding a new opportunity to claim "in the name of efficiency"- comprehensive privatization of all economic and commercial activities related to reconstruction.

The United States is at the forefront, with its armed forces deployed in a major humanitarian offensive. Results are clearly a generous desire to help. But also undeniable geopolitical interests. Washington prefers to invade Haiti to also help to be seen that their shores are invaded by tens of thousands of Haitian boat people. Basically, it's the same old obsession: "confine the plague" ...

(1) Risk and poverty in a changing climate. Investing today for a Safer Tomorrow, United Nations, New York, May 2009.