Freak torrential rains – 185 litres per square metre – have caused flooding and mudslides in the Portuguese Isle of Madeira in the Atlantic Ocean, killing at least 42 people, injuring 70, leaving around 250 homeless and vast swathes of the island devastated. The Regional Government of Madeira has proclaimed a State of Emergency and has appealed to the European Union for emergency funding. 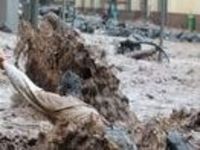 Lying 500 km into the Atlantic from the North African coast and 900 km from the European mainland, this Autonomous Region of Portugal is used to torrential rain and much of the deluge which fell on the island early on Saturday morning flowed through irrigation channels, bearing the water from the top of this mountainous island.

However, the intensity was such that trees were uprooted, huge boulders were sent hurling down the mountainsides, power cables were torn down and landslides tore through remote villages, destroying roads and leaving the population of some areas cut off.

For this reason the casualty figures (40 dead, 70 injured) are a first estimate based upon local media reports. Eye witnesses in the capital city, Funchal, have told PRAVDA.Ru that there is an eerie silence reigning across the island after a storm which left vast areas looking like a war zone.

The President of the Autonomous Region, Joao Jardim, said “There is no point in dramatising the situation too much” but has nevertheless called a State of Emergency and appealed to the European Union for emergency funding. Meanwhile, the Portuguese Interior Minister, Rui Pereira, has declared that he will ask the E.U. to declare a public calamity.

The quantity of rain that fell on Madeira between 5.00 and 11.00 on Saturday morning was twice the level which activates a red alert. During these six hours, 111 mm of precipitation fell, and 52mm of these in just one hour, between 9.00 and 10.00.

Given the island’s location, frequently visited by columns of warming and cooling air which create extreme, unstable weather conditions, it is surprising that it does not have a radar system which warns in advance as to probable precipitation levels. In recent years, the search for space for construction blocked streams which would have channelled the rainwater away, although the irrigation channels built by the Regional Government probably staved off a worse disaster in this case.