The Colombian prosecutor announced on Tuesday (16) impressive data on the activity of paramilitaries in the country. According to a report published by the Office of Justice and Peace Promotion, 4112 ex-combatants of the paramilitary United Self Defense Forces of Colombia (AUC) confessed to having committed 30,470 murders in a 20-year period - from mid-'80s to 2003, when it would have begun the process of demobilization. 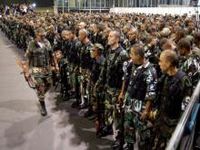 The death toll puts the paramilitary groups in Colombia - a country whose "democracy" is one of the oldest in Latin America - at the same level of dictatorships in the region, like that of Argentina (1976-1983), who left nearly 30 people dead and missing.

Among the data obtained by the prosecutor are the records of 1085 massacres; 1437 underage recruits; 2520 disappearances, forced displacement 2326, 1642 robberies, and 1033 kidnappings. The Colombian authorities are checking the information that was obtained through confessions provided in a plan that gives proceedings for veterans benefits.

The Law of Justice of the Peace, sponsored by the government of President Álvaro Uribe, sets a maximum sentence of 8 years for the paramilitaries to submit to the justice as a result of confessing their crimes. At least 32 paramilitaries had reportedly surrendered their weapons in this process.

"The country should be appalled by the revelation of such a high number of systematic killings," said analyst Alvaro Villarraga, a former member of the guerrilla People's Liberation Army (PLA) and now director of the Democratic Culture. "But the sad thing is that this estimate may be well below the reality." According Villarraga, the numbers are an example of the "widespread" humanitarian crisis that Colombia still is.

1,085 massacres were committed by members of the paramilitary