Olga, a ten-year-old girl from the Novosibirsk region of Russia, was balancing between life and death after she suffered from a Staffordshire terrier’s attack. She has had several reconstruction surgeries, although medics say that a series of other operations will be necessary in the future too. A complete recovery will take several years. 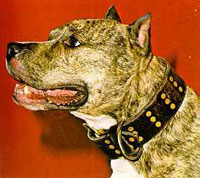 The tragedy took place in the town of Belokurikha, near Novosibirsk. Elena Balakhina, 35, and her daughter Olga were living in a small private home. The woman developed friendly relations with her new neighbors.

“We made friends and the new neighbor would often come and visit us for a cup of tea – she liked to chat. Me and my daughter have never visited them because they were keeping two fight dogs. My daughter would often see them behind the fence and she was afraid of visiting the neighbors,” the mother of the injured girl said.

That day, August 17, 2009, the neighbor paid Elena and Olga a visit again, at about 9 o’clock p.m. Elena had a call from a health resort, where she worked as a nurse – they asked her to go there to serve medicines to a patient. The neighbor said that she could leave her daughter with her for a couple of hours.

The little girl continued the story:

“We went for a walk, but later the woman invited me in for some tea. I did not want to go because of the dogs, and I asked her to pull the dogs away first. The neighbor said that she would not do it because her dogs were very kind. As soon as we stepped behind the gate, the dogs – Rich and Dina – approached me and began to run around me. Suddenly, Rich jumped on my back, knocked me down and started pulling my hair. Then I felt that he got off me. I ran into the house and sat down on a chair. The next moment I saw the two dogs running towards me. There was a room nearby, so I ran in there and shut the door,” the girl said.

The woman called the ambulance only after she forced the dogs into the basement. The physician found the girl bleeding. Her scalp was found on the floor near.

“They took my daughter to a local hospital and assured me that I would not have to take her to the central hospital in Barnaul. Olya had fever for a week, she stopped eating and could hardly move. So I eventually grabbed my daughter, put her in the backseat on our car and went to Barnaul. They diagnosed her there with blood poisoning, skull bones abscess, brain abscess and meningococcosis. The doctors saved her from death, but a big part of her skull was still naked,” Olga’s mother said.

The girl was transferred from Barnaul to a bigger hospital in Novosibirsk. Surgeons had to take a patch of skin from the girl’s leg to stitch it on her head.

The girl will have to wear a wig for the rest of her life. Hair will not grow on the new skin, medics said.

“I learned that a similar incident took place in Novosibirsk ten years ago, when a fight dog mauled a five-year-old girl. I read that there was a specialist who restored the girl’s pelage. When I found him, he examined my daughter and said that it would take several years and about eight surgeries. Olga listened to him too and agreed to do it,” Elena Balakhina said.

What about the dog’s owner?

“She brought 5,000 rubles ($90) the next day after the tragedy, and that was it. When we came home to Belokurikha, the dogs were still running and barking there near the house of our neighbors. I asked them to take the dogs to a dog pound, but they said that they would never do this because those dogs were like kids to them. Olya is scared to go out, and I want to sue the neighbors. All they tell me is – “How can you punish a dog?” But I want to punish them, not their dogs,” the desperate woman said.