Surgeon Fighting for Implant Gets Bullet in His Eye

A fight between two medics in Moscow ended with a tragedy. The doctors fought about the money, which they had received for an implant. A surgeon pulled out a scalpel and attacked an orthopedist, but the latter shot the attacker in the eye. 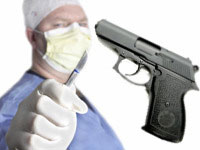 Surgeon Fighting for Implant Gets Bullet in His Eye

The dramatic scuffle took place at a dental office of the Moscow State University of Medicine and Dentistry. An orthopedist shot an oral surgeon in the eye. The gun-wielding medic said that he had only committed an act of self-defense.

The story took place on February 10 when the two doctors on duty fought over the money for an implant. The surgeon, identified as Hairullah Nigmatov, grabbed a scalpel and attacked his colleague, but the latter was armed with a gun. The bullet stuck in the victim’s eye-pit.

Nigmatov was hospitalized soon after the incident. The man will have to use an artificial eye.

The shooter, Dmitry Zakharov, aged 31, was taken to a police station. The medic told investigators that he was trying to defend himself.

Another “medical tragedy” took place at the central hospital of the city of Novosibirsk this week.

A young doctor, Valery Oleinikov, told his colleagues that he would have to disappear from the intensive care unit for five minutes. Afterwards, the young doctor rushed to his lover, Svetlana Bozhok (21), who worked as a nurse at the same hospital. The meeting had a very bad ending: the woman told the man that their affair had been over.

“I don’t know where the young man took a hammer from, but he hit her head with a hammer several times,” Vadim Kovalenko, the head physician of the hospital said.

The young woman collapsed. The man thought that he had killed her, so he decided to kill himself. He made himself an injection of arduan – the drug, which is used in surgical operations to relax cross-striped muscles.

“The guy was found dead. He had a picture of him and his ex girlfriend in his pocket. He wrote on the back of the photo that he could no longer see any point in life, he condemned himself for what he had done. Valery and Svetlana had been dating for a year, but the woman decided to break up with him,” Mr. Kovalenko said.

It later became known that the young man threatened to kill the woman if she decided to leave him, he even threatened her parents. No one treated his words seriously.

“Svetlana has been operated on. She had a brain contusion, but we hope that she will be fine,” Kovalenko said.