US Attempts to Demonize and Destabilize Venezuela Will Not Work

The United States has been conducting a strident program of disinformation about Venezuela, all aimed at a repeat performance of their 2002 attempt at a coup against the democratically elected government of Hugo Chavez and Venezuela. Numerous individuals in the employ or service of the US government have been writing articles and false reports stating that President Chavez continues to impose an authoritarian populist political model in Venezuela that undermines democratic institutions. 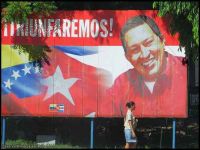 US Attempts to Demonize and Destabilize Venezuela Will Not Work

Contrary of these reports, Venezuela is in the process of extending democracy to all of its people. This includes finding a balance between the state and the market that allows it to guarantee the welfare of the people and to overcome the historical wrongs of poverty and inequality.

Venezuela’s ranking on the UN Human Development Index has risen by 10 positions over the last decade, as levels of poverty have dropped and access to social services have increased. Political participation and consciousness in Venezuela have expanded dramatically over the last decade. These advances have occurred within what is being called, “Socialism of the 21st Century,” a democratic political process centered around fostering the well-being of the people of Venezuela as an alternative to the capitalist model currently enmeshed in the global economic crisis.

Venezuela has been one of the countries least affected by the global economic crisis, which makes one wonder why do they single out Venezuela when in the United States many people have lost their homes and jobs? Unemployment in Venezuela increased by 0.6% last year from 7.4% in 2008 to 8%. This is not a good thing, but relative to other countries, is minor. Venezuela has made tremendous advances in health, education, grassroots democracy, indigenous representation, recuperation of history and culture, and a massive decrease in poverty and extreme poverty. Many new residences have been constructed, with people for the first time finding out what it’s like to have running water, electricity and a telephone.

The propaganda and disinformation also claim that Venezuela has curtailed free expression and opposition activities by shutting down independent news outlets, harassing and detaining protestors, and threatening opposition leaders with criminal charges for corruption.

No independent media outlets have been shut down in Venezuela. However, relevant laws and regulations have been applied to outlets operating in the country, just like in any other democracy. In Venezuela, more than 76 percent of the media on public airwaves is privately owned and operated. Most of these are controlled by the political opposition to the government. Additionally, more than 184 channels broadcast freely through cable networks.

Protestors continue enjoying their constitutional rights to peaceful assembly and exercise the political rights that the 1999 Constitution grants them. They can travel freely around the world promoting their political agenda, including to the U.S., and then return to Venezuela unscathed.

Venezuela is also accused of tolerating corruption. However, criminal charges have been filed against a variety of individuals for corruption, regardless of their political affiliations. Venezuela only recently averted a financial crisis when it took steps tostop anumber of banks from threatening the integrity of the country s financial system. Two people charged in this case were very close to government officials. Both will stand trial for their crimes.

Venezuela cannot allow corrupt criminals to hide behind ridiculous charges of political persecution in order to avoid facing justice in Venezuela. In that regard, Venezuela has recently requested extradition of one that fled Venezuela’s justice system and is currently living in the U.S. with money he stole from Venezuelan taxpayers. By granting some of these fugitives safe haven, the U.S. has politicized the concept of political asylum. It is worth highlighting that over the past few years Venezuela has deported several criminals that were wanted by the U.S.

Many businesses increased prices on their current stock, bought at the old exchange rate, thereby earning huge profits at customers’ expense. The majority of workers at Exito support the nationalisation measure taken by the government, and Exito will now be incorporated into the Corporation of Socialist Markets (COMERSO), a publicly owned network which sells products at subsidised rates.

Venezuela engages with its neighbors through a number of means, including the Bolivarian Alliance of the People of Our Americas (ALBA), the Union of South American Nations (UNASUR), the South American Common Market (MERCOSUR) and a variety of energy initiatives such as PetroCaribe. The countries of the region, therefore, are better able to cooperate on issues of mutual concern, particularly in developing strategies to overcome poverty. These alliances are not a threat to anyone, to the contrary, they contribute greatly to prosperity and stability in the region…which is obviously contrary to the wishes of certain entities.

One of the most serious accusations being made by the US against Venezuela is linking it to terrorism and supposedly terrorist groups. Venezuela seeks especially to attack the conditions that allow terrorism to grow, while on counter-drug operations Venezuela believes strongly in shared responsibility approaches that escape the failed military and supply-side based models. It bears mentioning that drug seizures in Venezuela increased by 38 percent after 2005, the year that cooperation ended with the DEA.

However, fighting terrorism works both ways. Venezuela has been waiting for Luis Posada Carriles, a known terrorist living freely in South Florida, to be extradited to Venezuela for his role in the 1976 bombing of a civilian airliner. In the U.S., he has only been accused of lying to immigration officials. This is a travesty of justice and a blatant example of gross hypocrisy.

The U.S. has had a terrible history of intervention in the affairs of sovereign nations in the hemisphere for decades. Such lies and disinformation as they attempt to spread can be interpreted by some groups in the region as an invitation to explore anti-democratic means to achieve political ends.

It is time for change and the US needs to mind its own business, and stop interfering in the affairs of other countries. After all, they stridently told Russia that they reject “spheres of influence” while ignoring the fact that that also works both ways.