The Paramilitaries and the Colombian Farce

by Mauro Santayana, the JB Online 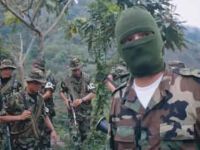 The Paramilitaries and the Colombian Farce

Unsurprisingly: Human Rights Watch, an international organization that monitors human rights violations in the world, reported in Bogota, new crimes of the paramilitaries in Colombia. Besides the killings, there is the forced displacement of entire populations under the threat of armed criminal gangs. These commands rely on the protection of sectors of the armed forces, police, prosecutors and some dignitaries of the government of Uribe.

The country has been the hardest hit by violence in Latin America, although it is endowed with an intellect that stands out among the neighbors. It is not only the home of the novelist, Gabriel García Márquez, an exceptional poet and playwright. As other crossbred countries of the mountain range, Colombia is dominated by a minority of big businessmen, mostly white, many of foreign surnames, that control banks, industry and the media - and, similarly, drug trafficking and state institutions.

These elites belong to President Uribe. Against them were, during the 20th century, several armed movements. The State was not able to overcome them with their classical forces of repression. Some business owners then decided to finance the paramilitaries, who officially outside the State started to exterminate urban and rural leftists, under the pretext of complicity with FARC. These groups never faced the guerrillas head on. It was nasty terrorism: the victims are mostly young people abducted from the outskirts of cities and residents in the fields. They are just "numbers" to justify the money received.

Groups of thugs formed as well, groups of common criminals or former prisoners, fugitives from prison, ex-military and ex-cops, drug dealers and unemployed, all armed, equipped and paid according to the number of victims killed.

There is strong evidence that such groups have received help and training from the CIA, although the Americans deny it. What they do not deny is the presence of consultants and advisers that "help" the "regular" forces of Colombia to combat the guerrillas, under the pretext of suppressing the drug trade.

The Colombian government has become a scary fantasy. Prominent members of the Uribe government are accused of complicity with the paramilitaries. There was Uribe himself, when governor of Antioquia, whose capital is Medellín. The group sponsored Convivir, a front organization for exterminators, funded by the big Chiquita banana company - according to U.S. documents. The same documents indicated that at the beginning of the Uribe government, the then army chief Mario Montoya, was compliciting with a death squad that had eliminated at least 14 people in Medellin.

Between 2003 and 2006, the Colombian government, under pressure of world opinion, "provided the demobilization of 30 thousand members of paramilitary organizations, but there is evidence that this was a scam." As a result - I quote the report by HRW - many groups have acted fraudulently and recruited civilians to pass as part of the paramilitary demobilization, and thus preserved its active staff. The real chiefs and deputies of the groups are concealed, and kill again months later. Since 2007, these groups turned to the light of day - it is estimated there are between 4 thousand and 10 thousand of its troops now.

The report has complained that a chief promoter of Medellín, Guilherme Valencia Cossio - the brother Minister of the Interior and Justice of Uribe - was a collaborator with the paramilitary groups. The fact is that there is clear condescension and involvement of senior members government of Álvaro Uribe - there are barely eight years in power, with the death squads.

President Barack Obama, as candidate, announced that if elected, he would cut aid to Colombia. Hillary Clinton as Secretary of State, negotiated the installation of U.S. bases in the country, and has secured the decisive support from Washington to Uribe and his group.