The founder of al-Qaeda’s division in the Northern Caucasus, Mohmad Shabaan, an Egyptian known as Seif Islam, was killed in Dagestan as a result of the operation conducted by the troops of the Federal Security Service. 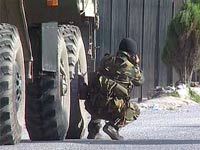 Afterwards, Seif Islam opened a terrorist training center in Chechnya, where he was training terrorists to organize bomb attacks.

During the second Chechen war, the terrorist served as an advisor for religion to Chechen President Aslan Maskhadov. He was also in contact with another well-known terrorist, Shamil Basayev.

Recently, Shabaan has been a close associate of terrorist Doku Umarov. He organized bloodiest terrorist acts in the region. Shabaan went to Dagestan after federal troops killed Doctor Mohammad – the Algerian terrorist responsible for al-Qaeda’s activities in the republic.

Mohmad Shabaan was in charge of organizing terrorist activities and recreating a channel to smuggle arms and explosives to Dagestan from Georgian special services.

He conducted his most recent terrorist act on January 6 of this year when a suicide bomber drove his vehicle on the territory of a road patrol station in Dagestan’s capital, Makhachkala. Six police officers were killed, 20 others, including civilians, were wounded.