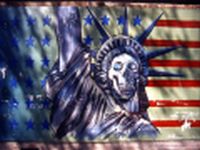 If you shared my pain you would not continue to make me suffer, to torture me, to deny me my dignity and my rights, especially my rights to self-determination and self-expression. Six years ago you sent your Ambassador Extraordinary and Minister Plenipotentiary to perform an action illegal under the laws of your country, my country and of the international community of nations. It was an act so outrageous, so bestially vile and wicked that your journalists and news agencies, your diplomats and politicians to this day cannot bring themselves to truthfully describe or own up to the crime that was committed when US Ambassador James Foley, a career diplomat, arrived at the house of President Jean-Bertrand Aristide with a bunch of CIA thugs and US Marines to kidnap the president of Haiti and his wife.

The Aristides were stowed aboard a CIA plane normally used for 'renditions' of suspected terrorists to the worldwide US gulag of dungeons and torture chambers. The plane, on which the Aristides are listed as "cargo", flew to Antigua - an hour away - and remained on the ground in Antigua while Colin Powell's State Department and the CIA tried to blackmail and bribe various African countries to accept ("give asylum to") the kidnapped president and his wife.

The Central African Republic - one of George W Bush's 'Dark Corners of the World' - agreed for an undisclosed sum, to give the Aristides temporary asylum.

Before any credible plot can be designed and paid for - for the disappearance of the Aristides - they are rescued by friends, flown to temporary asylum in Jamaica where the Government cravenly yielded to the blackmail of Condoleezza Rice to deny them the permanent asylum to which they were entitled and which most Jamaicans had hoped for.

Meanwhile, in Haiti, the US Marines protected an undisciplined ragbag of rapists and murderers to allow them entry to the capital. The Marines chased the medical students out of the new Medical School established by Aristide with Cuban help and teachers. The Marines bivouac in the school, going out on nightly raids, trailed by fleets of ambulances with body bags, hunting down Fanmi Lavalas activists described as 'chimeres' - terrorists.

The real terrorists, led by two convicted murderers, Chamblain and Philippe, assisted the Marines in the eradication of 'chimeres' until the Marines were replaced by foreign troops, paid by the United Nations, who took up the hunt on behalf of the civilised world - France, Canada, the US and Brazil. The terrorists and the remains of the Duvalier tontons and the CIA-bred.

FRAPF declared open season on the remnants of Aristide's programmes to build democracy. They burnt down the new museum of Haitian culture, destroyed the children's television station and generally laid waste to anything and everything which could remind Haitians of their glorious history.

Haitians don't know that without their help Latin America might still be part of the Spanish Empire and Simon Bolivar a brief historical footnote.

About 90 years ago when Professor Woodrow Wilson was president of the USA, his secretary of state was a fundamentalist lawyer named William Jennings Bryan who had three times run unsuccessfully for president. The Americans had decided to invade Haiti to collect debts owed by Haiti to Citibank.

General Smedley Butler, the only American soldier to have twice won the Congressional Medal of Honour, described his role in the US Army: "I helped make Mexico safe for American oil interests in 1914. I helped make Haiti and Cuba a decent place for the National City Bank boys to collect revenues in. I helped in the raping of half-a-dozen Central American republics for the benefits of Wall Street. The record of racketeering is long.” General Butler said: "I suspected I was just part of a racket at the time. Now I am sure of it. ... My mental faculties remained in suspended animation while I obeyed the orders of higher-ups. This is typical in the military service."

Butler compared himself unfavourably to Al Capone. He said his official racketeering made Capone look like an amateur. Secretary Bryan was dumbfounded by the Haitians. "Imagine," he said, "Niggers speaking French!"

Smedley Butler and Bryan were involved in Haiti because of something that happened nearly a hundred years before. The French slave-masters, expelled from Haiti and defeated again when they tried to re-enslave the Haitians, connived with the Americans to starve them into submission by a trade embargo. With no sale for Haitian sugar, the country was weak and run-down when a French fleet arrived bearing a demand for reparations.

Having bought their freedom in blood, the Haitians were to purchase it again in gold. The French demanded, essentially, that the Haitians pay France an amount equivalent to 90 per cent of the entire Haitian budget for the foreseeable future. When this commitment proved too arduous to honour, the City Bank offered the Haitians a 'debt exchange", paying off the French in exchange for a lower-interest, longer-term debt. The terms may have seemed better but were just as usurious and it was not paid off until 1947.

Because of the debt the Americans invaded Haiti, seized the Treasury, exiled the president, their Jim Crow policies were used to divide the society, to harass the poor and finally provoked a second struggle for freedom which was one of the most brutal episodes in colonial history.

Long before Franco bombed Guernica, exciting the horror and revulsion of civilised people, the Americans perfected their dive-bombing techniques against unarmed Haitian peasants, many of whom had never seen aircraft before. The Americans set up a Haitian Army in the image of their Jim Crow Marines, and it was these people, the alien and alienated elite who, with some conscripted blacks like the Duvaliers, have ruled Haiti for most of the last century.

When I flew over Haiti for the first time in 1959 en route from New York to San Juan, Puerto Rico, I saw for the first time the border between the green Dominican Republic and brown Haiti. First-world journalists interpret the absence of trees on the Haitian side to the predations of the poor, disregarding the fact that Western religion and American capitalism were mainly responsible. Why is it that nowhere else in the Caribbean is there similar deforestation?

Haiti's Dessalines constitution offered sanctuary to every escaped slave of any colour. All such people of whatever colour were deemed 'black' and entitled to citizenship. Only officially certified 'blacks' could own land in Haiti. The American occupation, anticipating Hayek, Freedman and Greenspan, decided that such a rule was a hindrance to development. The assistant secretary of the US Navy, one Franklin D Roosevelt, was given the job of writing a new, modern constitution for Haiti.

This constitution meant foreigners could own land. Within a very short time the lumberjacks were busy, felling old growth Mahogany and Caribbean Pine for carved doors for the rich and mahogany speedboats, boardroom tables seating 40, etc. The devastated land was put to produce rubber, sisal for ropes and all sorts of pie in the sky plantations.

When President Paul Magloire came to Jamaica 50 years ago Haitians were still speaking of an Artibonite dam for electricity and irrigation. But the ravages of the recent past were too much to recover.

As Marguerite Laurent (EziliDanto) writes: Don't expect to learn how a people with a Vodun culture that reveres nature and especially the Mapou(oak-like or ceiba pendantra/bombax) trees, and other such big trees as the abode of living entities and therefore as sacred things, were forced to watch the Catholic Church, during Rejete - the violent anti-Vodun crusade - gather whole communities at gunpoint into public squares, and forced them to watch their agents burn Haitian trees in order to teach Haitians their Vodun Gods were not in nature, that the trees were the "houses of Satan".

In partnership with the US, the mulatto President Elie Lescot (1941-45)summarily expelled peasants from more than 100,000 hectares of land, razing their homes and destroying more than a million fruit trees in the vain effort to cultivate rubber on a large plantation scale. Also, under the pretext of the Rejete campaign, thousands of acres of peasant lands were cleared of sacred trees so that the US could take their lands for agribusiness.

Norman Manley used to say "River Come Down" when his party seemed likely to prevail. The Kreyol word Lavalas conveys the same meaning.

Since the Haitian people's decisive rejection of the Duvalier dictatorships in the early 90s, their spark and leader has been Jean-Bertrand Aristide whose bona fides may be assessed from the fact that the CIA and conservative Americans have been trying to discredit him almost from the word go. As he put it in one of his books, his intention has been to build a paradise on the garbage heap bequeathed to Haiti by the US and the Elite.

The bill of particulars is too long to go into here, but the destruction of the new museum of Culture, the breaking up of the medical school, the destruction of the children's television station gives you the flavour. But the essence is captured in the brutal attempt to obliterate the spirit of Haitian community; the attempt to destroy Lavalas by murdering its men and raping its women, the American-directed subversion of a real police force, the attacks on education and the obliteration of the community self-help systems which meant that when Hurricane Jeanne and all the other weather systems since have struck Haiti, many more have died than in any other country similarly stricken. In an earthquake, totally unpredictable, every bad factor is multiplied.

The American blocking of international aid means that there is no modern water supply anywhere, no town planning, no safe roads, none of the ordinary infrastructure of any other Caribbean state. There are no building standards, no emergency shelters, no parks.

If you want to understand me, look at the woman in the picture, and the children half-buried with her. You cannot hear their screams because they know there is no point in screaming. It will do no more good than voting.

What is she thinking: perhaps it is something like this - No, mister! You cannot share my pain! Some time, perhaps after the camera is gone, people will return to dig us out with their bare hands. But not you.