Haiti, a small Caribbean nation, has been in the center of attention of the world media for two weeks already. The massive earthquake killed tens, if not thousands of people there. However, the consequences of the disaster could have been a lot less terrible if Haiti had been a politically stable nation. 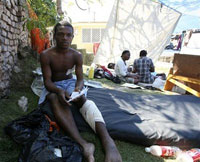 The day of January 13, 2010 will be remembered in the history of Haiti and the whole world forever. The number of victims still remains unknown, which may mean that the Haitian quake will become the bloodies in the history of human civilization. The previous natural disaster of similar destructive power occurred in December of 2004, when tsunami killed hundreds of thousands of people.

Haiti , a former French colony, with the ten-million-strong population, is the poorest nation of the Western hemisphere. The per capita GDP in 2008 made up only $1,317 a year. Haiti’s child mortality is one of the highest in the world. Every tenth Haitian has AIDS.

About 50 percent of the country’s population can neither read nor write. Hundreds of thousands of people live in miserable huts and cardboard houses. Hunger is a part of everyday life in Haiti. The biggest dream of nearly every citizen of Haiti is to leave the country and go somewhere else. Millions of them have already moved to the USA and France.

It may seem surprising that such terrible things take place in the region which many other people consider tropical paradise. Its neighbors – the Dominican Republic and Jamaica – attract thousands of tourists and make millions on them. Haiti is not an attraction for tourists, though. There are no hotels, no roads and no comfortable beaches there. The level of criminality is probably the highest in the Western hemisphere.

Haiti as an independent nation appeared on the map of the world in 1804. More than two centuries of independence have not helped the country become at least a developing nation. The matter is not about the racial structure of the population. The Bahamas, Trinidad and Tobago live a lot better.

US troops occupied Haiti in 1915-1934. It did not help the impoverished nation much. However, the USA then helped the local president Francois Duvalier not to let Haiti follow the example of the socialist revolution in Cuba.

Duvalier was one of the most infamous dictators in the history of the Western Hemisphere. The cult of voodoo in Haiti was given an official status during his rule. Duvalier exterminated up to 30,000 of his opponents.

He received 100 percent of votes during the presidential election in 1964. He died in 1971. His son, Jean-Claude Duvalier, stayed in power for 15 years until he was toppled. A series of coups took place in the country afterwards, which made the US Army and the United Nations Organization interfere.

The humanitarian disaster in Haiti unveiled many problems, which the nation has been living with for decades. Most of them are connected with the fact that the country does not know what normal power is. None of its rulers have done a thing to give Haitians an opportunity to overcome poverty. Haiti has shown the world the terrible example of what political instability may lead to.