A little more than a week since a devastating earthquake, another has hit Haiti. This has initially been considered a new quake due to all the time elapsed and not an aftershock since the size alone qualifies it to be considered an earthquake in and of itself. At 6:03 a.m. local time, Haitians became disoriented and started running in the streets when the quake hit. The piles of concrete and rubble began to tremor. 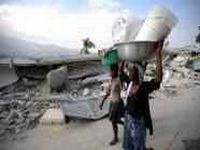 The quake was 13.7 miles depth, and located 35 miles northwest from the capital. A slow vibration intensified into side-to-side shaking that lasted about eight seconds. Some in Port-au-Prince said the far stronger January 12 quake seemed to last for 30 seconds.

The shaking ripped 8-inch (20 centimeter) cracks in a road west of the capital near Leogane, where U.S. Marines were setting up a post to aid quake victims who are sleeping in streets, culverts and driveways, often under tree branches draped with sheets to guard against the sun.

This has happened while there are still 3 million Haitians waiting for food, water and emergency services. Only one-tenth of the population has actually been able to receive any sort of assistance. The initial mood is changing from one of resilient determination to one of despair, anger and fear.

The latest quake, now combined with a light rain, has complicated rescue efforts. The rain and the new quake this morning has managed to make debris more compact.

Hundreds of thousands of Haitians remain homeless, hungry and in mourning. Most are still waiting for the benefits of a $1 billion global aid campaign that has brought hundreds of doctors, workers and thousands of troops to the quake-ravaged little country.

Haiti's ambassador to Spain, Yolette Azor-Charles, said reconstruction could take 25 years and warned the death toll could top 200,000 as help has yet to reach many villages.