Why doesn’t NATO take Russia’s approaches on a new security pact seriously? Because the Freedom, Democracy, Stability and Prosperity labels attached to the Organization are no more than outer packaging which hides the reality within: NATO is no more and no less than an instrument which serves the interests of the arms lobby. 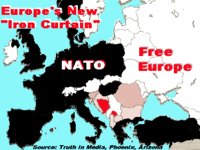 Russia’s approaches for a bilateral security treaty, which would inevitably pass by a serious and long-standing binding bilateral agreement on friendship and non-aggression, will not be accepted by NATO for one reason alone: NATO is not about collective security any more and has not been since the Warsaw Pact was disbanded on July 1, 1991.

Last month, Andres Fogh Rasmussen, the non-elected Danish Secretary-General of the non-elected NATO (which nevertheless still dictates the foreign policy of its member states), declared “There can be no doubt whatsoever that NATO will remain our framework for Euro-Atlantic security”. In a nutshell, there is no space for collective agreements with Russia because NATO continues to focus its attention on the Western Europe-Atlantic space common to the Cold War.

It is old hat. NATO has not moved on. It is an anachronism. NATO provides jobs for the boys. NATO serves the interests of the arms lobby which gravitates around the Pentagon and which has its tentacles deep within US foreign policy. NATO is a stone around the neck of the taxpayers not only of the United States of America but also of its member states. Who, after all, funds its operations? Just in Afghanistan and Iraq, the operations of NATO countries have cost almost one trillion dollars (one thousand billion, or 1,000,000,000,000). How many hospitals and schools could be bought with that?

Where NATO could move forward, reinventing itself and including Russia would be by respecting its pledges over the years not to expand (yet NATO’s word means nothing), by fighting international terrorism, by fighting piracy and by fighting international crime, including trafficking of drugs, human beings and weapons, side by side with Russia or any other nation wishing to modernise its objectives and fight what exists, instead of inventing ghosts to justify the self-perpetuation of the anachronism.

Yet while NATO likes to mention these areas, it maintains its Euro-Atlantic stance, freezing Russia out, not paying attention to Russia’s concerns and all the time aiming for an expansion into central and Eastern Europe, where there are plenty of customers for weaponry. And why should NATO reinvent itself when all it is today is the instrument to implement the policies of the arms lobby?

NATO’s strategy is clear in its breach of a pledge given to Russia in 1998 not to station “substantial combat forces” on territory formerly belonging to the Warsaw Pact. Why then did it expand? Who can give one single military reason for the expansion onto territory the Organization promised not to enter?

And what is NATO doing in Afghanistan? Today, Afghanistan produces twice as much heroin as the entire world produced in the year 2000 before the military invasion, by NATO, against the Taliban. Given that the cultivation of the opium poppy funds the Taleban and Al-Qaeda, what exactly is NATO doing? In recent years, instead of diminishing, the heroin production on Afghanistan has grown not two-fold. Not three-fold, not ten-fold, not even by twenty times. Today, the heroin production from Afghanistan is 40 times higher than it was in 2000.

In 2009, heroin produced in Afghanistan killed over 90.000 people around the world. Everybody knows that NATO pays the Taliban not to attack, so is the priority to allow them to produce heroin so that they can afford to pay, to keep NATO’s losses down?

In which case, what is NATO?