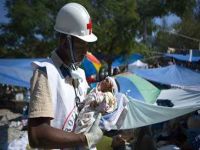 "La mort aime bien les pauvres," "Death loves the poor," wrote Le Monde Diplomatique in February 2005 after the tsunami had hit Indonesia, the coast of Sri Lanka, southern India and Thailand (1). It is too early to take stock of the level 7 earthquake on the Richter scale that devastated the poorest country in Latin America, Haiti, January 12.

But the worst is feared. For now, it is urgent to search for and rescue victims, provide medical assistance to survivors, build shelters, provide food and water and try to control disease. International solidarity and humanitarian assistance from all, from the United Nations (UN) to the United States through the European Union - and especially France, which cannot escape its historical debt to the island -- or Latin America, is mobilized by (or not) their potential.

Once again, an earthquake hits a region of the globe just spared by natural phenomena. In 2008, Haiti had already suffered hell from four tropical storms - Ike, Anna, Gustav and Fay. We cannot compare them to this earthquake clearly unpredictable, unexpected and difficult to anticipate. Nevertheless, a first question arises: why does, when these hurricanes that ravage the same way (with disastrous economic consequences), Haiti have to mourn seven hundred ninety-three dead and "only" four in Cuba? Like a zoom effect, disasters reveal the "real" status of societies.

Once past the initial shock and turmoil, governments, NGOs, international institutions and media will embroider, all together, the topic of "reconstruction". If you can use the term "rebuild" in a country that lacks everything.

But, of what reconstruction does one speak? After Hurricane Mitch, which in October and November 1998 claimed almost ten thousand lives and hundreds of thousands homeless in Central America, social movements put forward the idea of linking it to a new kind of development to reduce social vulnerability. Time has since then demonstrated that nothing has been done in that regard. The only attempt undertaken much later, by Honduran President Manuel Zelaya, ended with the coup of June 28, 2009 ...

A Haitian political class threatened by the specter of self-destruction, and who is not exempt from liability in the disasterous state of the country, who will read him the riot act? The international financial institutions that have delayed the process of debt cancellation despite the problems already faced by the people? Washington, World Bank, International Monetary Fund (IMF), Inter-American Development Bank, etc.? Do the countries called "friends" who have cynically pushed to the descent into hell of Haitian society?

Since 1984, the IMF has forced Port au Prince to liberalize its market. The few recent public services were privatized by denying them access to the most needy. In 1970, Haiti was producing 90% of its food, it now imports 55%. U.S. subsidized rice has killed local production. In August and September 2008, soaring world food prices had increased its prices by 50%, causing hunger riots.

A natural disaster can be attributed to fate. The shameful and intolerable impoverishment of urban and rural Haiti, no.