NASA is trying to sniff out which employee left a baggie of cocaine in Orbiter Processing Facility Number 3, the hangar that houses the Space Shuttle Discovery at Kennedy Space Center in Florida. KSC spokeswoman, Lisa Malone, said the substance was found in an area where workers have to swipe their identification cards electronically, although there were different reports exactly where the baggie was found. 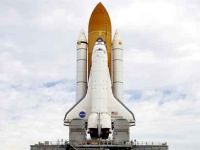 Spaceport officials said an employee found the baggie and notified security, which conducted tests confirming that a "small amount" of cocaine remained in the baggie.

Since access to the area requires a security badge, officials know that approximately 200 NASA workers and contractors were in the facility at the time the drug was found. NASA said that while there are "no indications" that anyone was high on cocaine while working on the Shuttle Discovery, drug testing of all employees in the area would be conducted. Neither has anyone come forward with information about the find. Both NASA and its contractors have zero-tolerance drug policies.

The space agency is preparing the shuttle for a launch to the International Space Station in March.

"This is a rare and isolated incident, and I'm disappointed that it happened, but it should not detract from the outstanding work that is being done by a dedicated team on a daily basis," Kennedy Space Center Director Bob Cabana said in a statement. "We have processes that will ensure the integrity of the shuttle. There is no reason whatsoever to believe this incident will have any impact on Discovery's upcoming launch."

Causing utter embarrassment to the agency, the discovery came the same week space shuttle workers took a half day off work to participate in NASA's employee "Safety Stand Down," held each year to "reinforce the importance of maintaining a strong and focused commitment to safety."

NASA will conduct an evaluation of work performed on the shuttle to ensure there are no safety or quality control problems. Processing of the vehicle continues, and the incident so far is not expected to impact the upcoming mission.