The Iraq War was Illegal

An exhaustive enquiry carried out by an independent enquiry in the Netherlands has determined that there was no basis whatsoever in international law for the war in Iraq, meaning that those who carried it out, who were behind the wanton destruction of the State of Iraq and the numerous massacres and human rights violations carried out during the campaign since 2003 are war criminals. 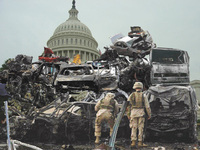 The Iraq War was Illegal

The Davids Report, a 551-page document released yesterday, is an exhaustive independent enquiry carried out in the Netherlands to examine the Dutch participation in the war in Iraq. Its conclusion is as crystal clear as it is simple to understand: There was no basis in international law for this war.

It concludes that the UN Resolutions passed in the 1990s did not provide a legal basis for war and that “the military action had no sound mandate in international law”. It claimed the Dutch Government was swayed considerably by “evidence” produced by the British and US Governments at the time, although the USA abandoned the attempt to get a separate UN Resolution providing a mandate for war when it became apparent the UNSC would not grant it. Indeed in 2004, the former UN Secretary-General Kofi Annan declared that the war was illegal.

Article 2, paragraph 4 of the UN Charter states: “All Members shall refrain in their international relations from the threat or use of force against the territorial integrity or political independence of any state, or in any other manner inconsistent with the Purposes of the United Nations”.

On the provisions which enable a nation to wage war, Article 51: “Nothing in the present Charter shall impair the inherent right of individual or collective self-defence if an armed attack occurs against a Member of the United Nations, until the Security Council has taken measures necessary to maintain international peace and security. Measures taken by Members in the exercise of this right of self-defence shall be immediately reported to the Security Council and shall not in any way affect the authority and responsibility of the Security Council under the present Charter to take at any time such action as it deems necessary in order to maintain or restore international peace and security”.

Self-defence was not in question because neither did Iraq wage war against the USA/UK and clique of sycophants supporting this outrage, nor was international security put at risk because the claims that Iraq had WMD were lies.

The attempts to use the UN Resolutions 678 and 687 (1991) as a basis for war were equally unfounded, since in any case where war is waged, a separate Resolution is required from the Security Council. Why indeed did the UK insist that the USA seek this resolution, and why did Washington try to obtain it?

Regarding Resolution 1441, paragraph 3 instructs Iraq to “provide to UNMOVIC, the IAEA and the Council…a currently accurate, full and complete declaration of all aspects of its programmes to develop chemical, biological and nuclear weapons, ballistic missiles and other delivery systems”. Iraq subsequently provided a 12.000 page report.

The “immediate, unimpeded, unconditional and unrestricted access” guaranteed under Paragraph 5 of 1441 had been fulfilled by Iraq. Paragraph 10 “Requests all Member States to give full support to UNMOVIC and the IAEA in the discharge of their mandates, including by providing any information related to prohibited programmes or other aspects of their mandates”.

The United States of America was not been forthcoming with this material apart from the nonsense presented to the UN Security Council by Colin Powell, who referred to foreign intelligence reports which turned out to be no more than a 1991 thesis copied and pasted from the internet by the British Intelligence Services and vague and absurd references about links between Saddam Hussein’s Ba’ath regime and Al-Qaeda. Did anyone remember the small detail that Saddam Hussein and Osama bin Laden were at opposite ends of the spectrum and hated each other?

Moreover, under Paragraph 12 of Resolution 1441, should the provisions of Paragraph 4 (failure to comply and cooperate fully with this resolution will constitute material breach, which was not the case) or Paragraph 11 (interference with the inspection process or failure to comply with the disarmament process, also not the case), not be fulfilled, the UNSC “decides to convene immediately…to consider the situation and the need for full compliance of all of the relevant council resolutions in order to secure international peace and security”.

None of the above provisions were met and there was therefore not one single article in the respective international law covering the issue which provided an iota of evidence justifying military action. George W. Bush and his regime, Anthony Blair and his Government and the sickening lackeys who crawled around their boots, and war criminals and should be tried in a court of law for their crimes.