U.S. Sponsor of Terrorists in Iran

The U.S. has been helping the Pakistan-based Jundallah terrorists to enter Iran through the Persian Gulf and carry out terrorist acts in the country, according to a report received Wednesday. Additionally, they have provided a ship to members of this terrorist group to travel and conduct operations in southern Iranian waters. 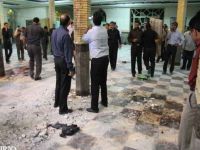 U.S. Sponsor of Terrorists in Iran

Jundallah, led by Abdolmalek Rigi, has claimed responsibility for numerous terrorist attacks in southeastern Iran, killing many civilians as well as government officials. The latest of such attacks was launched in October 2009 in Iran's southeastern Sistan-Baluchestan Province, on the border, killing more than 40 people including a number of top Republican Guards commanders and Shia and Sunni tribal leaders.

On Feb. 25, 2007, the London Telegraph reported that "America is secretly funding militant ethnic separatist groups in Iran in an attempt to pile pressure on the Islamic regime to give up its nuclear program. Such incidents have been carried out by the Kurds in the west, the Azeris in the northwest, the Ahwazi Arabs in the south-west, and the Baluchis in the southeast. Funding for their separatist causes comes directly from the CIA's classified budget but is now 'no great secret', according to one former high-ranking CIA official in Washington."

According to the Telegraph, Fred Burton, a former U.S. State Department counter-terrorism agent, supported the allegation by saying, "The latest attacks inside Iran fall in line with US efforts to supply and train Iran's ethnic minorities to destabilize the Iranian regime."

In April 2007, ABC News reported that, according to Pakistani and U.S. intelligence officials, the Jundallah group, which is "responsible for a series of deadly guerrilla raids inside Iran has been secretly encouraged and advised by American officials since 2005."

Robert Baer, a former CIA clandestine officer who worked for nearly two decades in South Asia and the Middle East was quoted in a July 8, 2008, article in The New Yorker: "The Baluchis are Sunni fundamentalists who hate the regime in Tehran, but you can also describe them as Al Qaeda. These are guys who cut off the heads of nonbelievers -- in this case, it's Shiite Iranians. The irony is that we're once again working with Sunni fundamentalists, just as we did in Afghanistan in the nineteen-eighties," Baer was quoted as saying.

That is referring to the despicable U.S. arming, training and support for Islamic terrorists against the Soviet Union, called in to help the local only Democratic progressive government Afghanistan ever had.

It was also proven, including in Turkey recently, that various terrorist groups like “ Al Qaeda and others exist courtesy of the nurturing and support by American, Israeli, and other Western military-intelligence structures.

Many propaganda groups such as Jamestown also receive funding in order to keep the terrorist bogeymen alive, acting as their mouthpieces to cry about human rights for terrorists. It is no small leap, therefore, to connect the dots…anti-government protests to western military intelligence and propaganda as well.