Berezovsky, Brazil and a Chronology of a Crime

Chronology of the crime involving the club's second-largest group of fans in Brazil: A highly suspicious business partnership, including the second largest supporters club in Brazil, Corinthians, exposed the criminal and mafia-life scenario of professional football with the participation of foreign "investors"…aka Berezovsky and others. 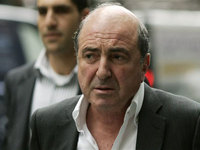 Berezovsky, Brazil and a Chronology of a Crime

A highly suspicious business partnership, including the second largest supporters club in Brazil, Corinthians, exposed the criminal and mafia-life scenario of professional football with the participation of foreign "investors"…aka Berezovsky and others.

The Federal Prosecutor made the official complaint in 2004, culminating in the indictment of club president Alberto Dualib for the crime of money laundering and conspiracy, and the courts ordered the arrest of foreign "investors" Boris Berezovsky, Kia Joorabchian and Nojan Bedroud.

The partnership between Corinthians and Media Sports Investment (MSI), represented by the Iranian Kia Joorabchian, was approved by the board of the club on 24 November 2004. The contract signed between the parties gave football rights and product licensing to the investment fund management department.

Already under suspicion of illegal business, Kia Joorabchian testified to Federal Police on 14 February 2005. The research continued and nine days later (23/2/2005), the prosecutor Roberto Porto, the public prosecutor of Sao Paulo, found that MSI sent US$ 2 million to the club and the sender was a company in the British Virgin Islands, Devetia Limited. But the sender was composed as an individual, an individual from Georgia.

On 15 April 2005, the final report of investigations made by the prosecutor indicates the crime of money laundering from MSI in partnership with Corinthians. The case was referred to the Federal Public Ministry, which has jurisdiction to investigate the alleged crime.

In testimony to delegate Protógenes Queiroz, Federal Police on 18 October 2006, the then president of Corinthians, Alberto Dualib, and his deputy, Nesi Curi, confirm that the Iranian Kia Joorabchian was outside the control of MSI and the three investors in partnership with the club were the Russian Boris Berezovsky, the Georgian Badri Patarkatsishvilli and Israeli Pini Zahavi. The testimony of Dualib and Curi to the Federal Police took more than five hours.

In August 2009, Judge Fausto Martin De Sanctis condemned businessmen Boris Berezovsky and Kia Joorabchian to pay a fine of RS$ 37.2 thousand (US $ 21.460) each because their lawyers, Alberto Zacharias Toron and Roberto Podval, had practised "litigation in bad faith". The two defendants countered suggesting that the judge had been biased and requested the case MSI-Corinthians be dropped.

F ive days later, the same August 2009, the Minister Celso de Mello, of the Supreme Court (STF), suspended he effects of the sentence passed by Judge Fausto Martin De Sanctis, who ordered the businessmen Boris Berezovsky and Kia Joorabchian to pay the fine.

Also in August 2009, Judge Fausto De Sanctis said that he did not disobey the Supreme Court (STF) in condemning the businessmen Boris Berezovsky and Kia Joorabchian to pay the fine for alleged complicity in bad faith defense, but was removed from the MSI Corinthians case, by order of the Federal Court.

Operation Perestroika
The Federal Police Operation Perestroika revealed through wiretapping, serious cases of corruption, conspiracy, money laundering, among the leaders of Corinthians in partnership with MSI. The scandal of Corinthians and MSI has shown the effects of capitalism in Brazilian soccer. Despite the CPI process in 2001, corruption remained rampant on football fields and this was just another case involving one of the biggest clubs in Brazil and foreign investors.

The press reported that the Federal Police Operation Perestroika revealed that in 2007, through wiretapping, serious cases of corruption, conspiracy, money laundering, among the leaders of the second most popular club in Brazil, Corinthians, and partners Media Sports Investment (MSI).

Money laundering was evident in the payment of salaries of players in offshore accounts, beyond the closing of business services from ghost companies included in the scheme of the travels by club president Alberto Dualib, to the headquarters of MSI, London.

A business trip and meeting with members of the hidden partners of Corinthians was in fact to bring resources of dubious origin to the club. Travel expenses account for up to RS$ 600 million (US$ 346m) taken from the coffers of the club during the administration of former President Alberto Dualib. More than 400 bills have not passed the official accounts, as reported at the time in the Brazilian media.

The operation also revealed that the true owner of MSI is the Russian tycoon Boris Berezovsky on charges of money laundering and murder in Russia. His fortune is estimated at about US$ 10 billion. And to escape the Russian authorities, he moved to London.

Alberto Duailib resigned the presidency after 14 years in power in Corinthians, but was charged as a defendant in proceedings in the Federal Court for money laundering and conspiracy in the club's partnership with MSI.

Judge presiding over the case is removed
This case was a serious setback in the career of Judge Fausto De Sanctis, who was removed from the MSI-Corinthians case by the Regional Federal Court of the 3rd Region. The Judge of the 6th Federal Criminal Precinct of Sao Paulo, Fausto De Sanctis was expelled from conducting criminal proceedings on the partnership between MSI and Corinthians, the target of investigation for alleged scheme of money laundering and tax evasion.

It was the first time that De Sanctis was excluded from the presidency of a criminal case in his career. This most severe blow has struck against the Judge who accumulates the direction of the most emblematic of cases in the Federal Court - the processes of Banco Santos, Operation Satyagraha and Castelo de Areia - and in July 2008, met the President of the Supreme Court (STF), Minister Gilmar Mendes, to order the arrest, twice, the banker Daniel Dantas, of Opportunity, installing an unprecedented crisis in the judiciary in Brazil.

At that time, 135 judges signed the document in support of De Sanctis, under threat of investigation by the National Justice Council (CNJ) for alleged contempt of the President of the Supreme Court.

De Sanctis did not comment on his removal. The decision to remove him from the case MSI-Corinthians was taken unanimously, on a preliminary basis by the judges Cecilia Mello and Herkenhoff Nelton Henrique dos Santos. Warned by fax, the judge interrupted the hearing of the case that he presided in his office. At that time the only prosecution witness, Antonio Roque Citadini, counselor of the Court of the State Auditors (ECA) and former head of the Corinthians, a staunch opponent of the alliance with MSI, was being heard.

The TRF 3 (Federal Court) was valid until the court put on trial the two motives presented by entrepreneurs Boris Abramovich Berezovsky, Joorabchian and Nojan Kiavash Bedroud - defendants in the MSI-Corinthians for bias.
The r equests for removal were from criminal lawyers Podval Roberto and Alberto Zacharias Toron, who defended the business of MSI. They contended that the judge prejudged the case to justify the receipt of the criminal complaint at the Attorney's Office.

"We can see from the conversations monitored, that the alleged criminal organization, not only would be used to launder money in Brazilian football, but to practice, in theory, all sorts of illegal activitiesof this type, in addition to launching flights in federal public administration, "says an excerpt from the judge's decision.

In September last year, the Supreme Court had ordered the annulment of the whole process. The lawyers filed suit with new exceptions of suspicion. The Federal Prosecutor's Office and the State Public Prosecutor found that in the shadow of the MSI-Corinthians partnership worked a Russian tycoon, Boris Berezovsky, who owns US$ 32 million invested in the team between 2004 and 2006.

The money was of a criminal origin, according to the complaint of the Attorney's Office. Research indicates that MSI was associated with Corinthians for the purpose of money laundering.