Venezuelan President Hugo Chavez announced on Sunday that military drones had penetrated Venezuelan air space along the north-west border with Colombia shortly after midnight on Sunday. The president warned that Venezuela is prepared to defend itself if Colombia or the United States violate Venezuela ’ s sovereignty. The two countries recently signed a military pact for the US to maintain bases in Colombia. In addition to signing the pact with Colombia, the U.S. is also increasing its military presence on the Dutch Antilles islands of Curacao and Aruba, which are located near Venezuela’s coast. 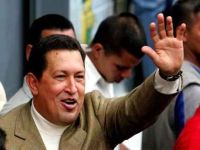 “The plane penetrated Venezuelan air space and was seen by several National Guard officials,” Chavez said during his Sunday presidential talk show, Hello President. “This type of plane seeks information, coordinates, takes photographs, records videos and some even drop bombs,” he added. The drone was controlled remotely from Colombia, Chavez added. A U.S. Air Force budget document indicated the US bases in Colombia are to be used for spying and “ full spectrum operations ” across the South American continent.

“They are preparing an aggression, ”said Chavez.“ Believe me, Colombian bourgeoisie; if you attack Venezuela, you will regret it... we are not unarmed, ” he warned. Venezuela's Vice President Ramon Carrizalez said recent investigations following the arrest of Colombian spies on Venezuelan territory reveal a link between Colombian Defense Minister Gabriel Silva and paramilitary forces that have infiltrated Venezuela.

Chavez said Colombia’s military would justify their attack with lies, making reference to a scandal that came to be known as the “false positives.”  Colombia fired at least 27 officers and soldiers a year ago for allegedly killing poor slum-dwellers and dressing them as guerrillas in an attempt to win benefits from the government.

Colombia said the military accord with the U.S. is focused on Colombia’s internal fight against guerrilla insurgents and drug trafficking, and accused Venezuela of “inventing stories about external threats in order to be able to spend billions of dollars on weapons they do not need.”  He added that Venezuela has made “ very direct and very clear ”indications of“ an eventual external aggression against Colombia.”

Chavez affirmed that Venezuela only prepares to defend itself against attack, and said the deployment of drones over Venezuelan territory is “an act of war.”  He ordered the Venezuelan Armed Forces to shoot down any drones that violate Venezuelan air space in the future.

Earlier this month, an Ecuadorian truth commission released a 131-page report on Colombia ’ s attack against Ecuador. According to the report, the U.S. used its military base in Ecuador to provide intelligence on the whereabouts of the FARC camp, and this was “fundamental” in Colombia’s deadly, murderous excursion, which set off a regional crisis.

He said "Sister Colombia was converted into the Israel of South America". That was in relation to the seven military bases that the U.S. empire settled on Colombian territory.

Furthermore, he spoke about the Honduran military dictatorship which remains in power. "The reaction in all our countries, now is that we have a type of coup for the 21st century: a coup bearing the stamp of legality from the United States." Indeed, the US would like to have this happen in all the progressive, democratic countries of Latin America. Honduras was and is their dry run into further adventurism.

Still, he said: "There is no need to cheat: the illusion is over and the blatant interventionism of the new Obama government demonstrates the gringo. Let us prepare then to defend our sovereignty in all fields."

Venezuela has cut off diplomatic ties with Colombia after the base deal The regional integration organization, Union of South American Nations (UNASUR) has taken up the issue of Colombia’s civil war and military pacts with the U.S. in repeated emergency summits over the past five months. Venezuela, Ecuador, and other nations proposed a regional peace and non-aggression accord, a reduction of arms purchases over the next five years, and a joint declaration opposing the presence of the U.S. military in South America. However, no consensus was reached, mainly because Colombia desisted.