Iran: The Truth and the Hysteria

The Green revolution has failed in the Islamic Republic of Iran. For one very good reason: it was coordinated from outside, by Iranian dissidents from well-off families, and concentrated on the moneyed classes in the main cities. The people are massively behind President Ahmadi-Najad. Where then to separate the truth and the hysteria? 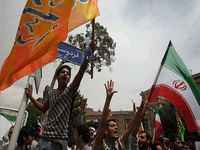 Iran: The Truth and the Hysteria

Sunday’s protests. Mir Hussein Mousavi. Murder by security forces. Repression. These are the headlines from numerous western media sources after Sunday’s protests. The sources? "A prominent supporter". "A film-maker". "An unnamed opposition spokesman".

Pretty professional euphemisms for what we in the media call claptrap. Bilge. Codswallop. Nonsense. Lies. Fabrications, of the type written by trainee journalists sent to investigate a blocked sewage pipe in an underground car park, and then come up with "Alien Trashes Car Park" type headlines.

In the case of Sunday’s protests in Teheran, while the western media are using "someone heard the baker say" type sources, who is quoting the authorities?

Who is stating that the Iranian authorities are admitting what happened and are carrying out an investigation? A thorough investigation. And while some are stating that the nephew of Opposition "Leader" Mir Hossein Mousavi (Seyed Ali Mousavi) was threatened by "secret police agents" that he would be killed days before the protests on Sunday, there are other versions.

One such version is from the Iranian authorities themselves, which claim that if a "secret police agent" wanted to kill Mosavi’s nephew, certainly they would not have spent days making threatening calls to him on the telephone and secondly, the death is being investigated. Because it is suspicious.

And why is it suspicious? Because yet again terrorist elements have been operating inside Iran. Indeed, President Ahmadi-Nejad, who is known for his frank and honest approach to political management, stated recently that there is evidence the entire campaign is being masterminded by Western interests. "A nauseating masquerade" is how he described Sunday’s rallies in which eight people lost their lives.

For a start the Iranian authorities have admitted the rallies were supported by "tens of thousands" of protesters. They have also admitted that "seven or eight people have died", more in fact than several western sources which concentrated on the Mousavi story.

Yet the Islamic Republic of Iran is not Mousavi and it is not the elitist classes which supported the Shah and today support the opposition.

Tehran’s Public and Revolutionary Prosecutor Abbas Ja'fari Dolatabadi admitted today that "Seven people were killed in the riots on Sunday" while one other reported killing is being investigated, due to the fact that the police investigation reveals that there were no shootings. The dead "Were hit with hard objects or by a kind of bullet that the police do not have".

The Iranian authorities are continuing to proceed with a proper investigation so that "the culprits behind these killings are punished".