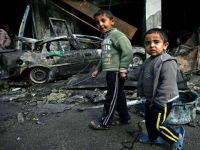 Prior to the establishment of Israel, Palestine had been multi-religious and multi-cultural. Christians, Muslims and Jews, Armenians, Greek Orthodox, to name a few, all had a place there; and all lived in relative harmony. Other nations fought wars and waged epic struggles to attain the kind of coexistence that was already a reality in Palestine.

But while the world strives toward the noble truths that we are all created equal, Israel legislates the notion of a Chosen People with exclusive rights and privilege for Jews. Where countries have worked to integrate their citizens to create the richness of diversity, Israel is working in reverse, employing racist policies to "Judaize" the land whereby property and resources are confiscated from Christians and Muslims for the exclusive use of Jews. Where there is consensus that certain human rights are inalienable, Palestinians have lived subject to the whims of soldiers at checkpoints; of airplanes and helicopters raining death onto them with impunity; of curfews and restrictions and denials; and of violent armed settlers who fancy themselves disciples of God.

Living under Israeli occupation, in refugee camps or in exile, we Palestinians have endured having everything callously taken from us – our homes, our heritage, our history, our families, livelihoods, freedom, farms, olive groves, water, security, and freedom. In the 1990s, we supported the Oslo Accords two-state solution even though it would have returned to us only 22% of our historic homeland. But Israel repeatedly squandered our generosity, confiscating more Palestinian land to increase illegal Jewish-only colonies and Jewish-only roads. What remains to us now is less than 14% of Historic Palestine, all of it as isolated Bantustans, shrinking ghettos, walls, fences, checkpoints with surly soldiers, and the perpetual encroachment of expanding illegal Israeli colonies.

While the Palestine Authority has led us into a shrinking land mass, less water, more restrictions, ominous walls and merciless slaughter, notable individuals and popular movements have mobilized for Palestine as once happened for South Africa. Moral authorities like former President Jimmy Carter, Nobel Laureates Desmond Tutu and Mairead Maguire, and former UN High Commissioner for Human Rights, Mary Robinson have condemned Israeli Apartheid. Organizations supporting the Divestment and Boycott Campaign against Israel include religious institutions such as the Presbyterian Church, The World Council of Churches, United Church of Christ, Evangelical Lutheran Church, the Anglican Church, the Federation of European Jews for a Just Peace, among many others.

It includes civil and professional organizations such as the National Lawyers Guild, the Irish Municipal, Public and Civil Trade Union in Ireland, as well as labor unions in Canada, Britain, and other nations. An academic boycott of Israel has spread throughout the UK and other parts of Europe and taken root in US universities across the country. The International Solidarity Movement has seen thousands of individuals come to the Occupied Territories to protect Palestinians from the violence of settlers during the olive harvest; to protect children on their daring daily journeys to school; and to bear witness to the inhumanity of military occupation.

The Free Gaza movement has transported by boat hundreds of people willing to risk their lives to bring greatly needed supplies to the besieged people of Gaza. This Christmas, internationals will march to the Egypt/Gaza border to break this siege. These are but a few examples of growing popular support for the Palestinian struggle.

When compared with the accomplishments of these grassroots movements, the futility of "negotiations" becomes painfully apparent. It is clear that we cannot look to our leaders (elected or imposed) to achieve justice. Just as only the masses could bring South Africa’s Apartheid to its knees, it will be the masses who will also bring Israel’s Apartheid crashing. The continued expansion of international action demanding the implementation of Palestinian basic human rights is inevitable.

The notion of religious-ethnocentric entitlement and exclusivity for one people at the expense of another has been rejected the world over. Palestinians reject it and we assert that we are human beings worthy of the same human rights accorded to the rest of humanity; that we are worthy of our homes and farms, our heritage, our churches and mosques, and our history; and that we should not be expected to negotiate with our oppressors for such basic dignities.

The two-state solution was and remains an instrument to circumvent the basic human rights of Palestinians in order to accommodate Israel’s desire to be Jewish. Polls show that Palestinians refuse to be the enemies of our Jewish brothers and sisters anywhere, just as we refuse to be oppressed by them. It is time for our shared land to be the inclusive and diverse country it had been. It is time for leaders to follow the people’s determined movement toward a single democratic state, with liberty and justice for all, regardless of religion.