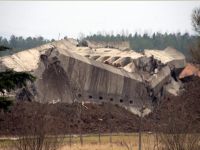 An as yet unidentified woman and her eight-year-old daughter were killed during the botched demolition of a war memorial in the Georgian city of Kutaisi today. Two other residents of the city were injured as well, perhaps more. The incident is being investigated. “According to preliminary information safety measures were not met,” Murtaz Zodelava, the country’s chief prosecutor said and added that the investigation was ongoing.

As could have been expected, one unholy criminal incident begets another. The blame lies nowhere else other than on the shoulders - and the black, filthy soul of MikHEIL Saakashvili, the Georgian president who ordered the demolition against the will of the people of Georgia. It demonstrates the total lack of morals and ethics of the Saakashvili regime, not to mention a total disrespect for Georgians who died in the war.

The Russian Foreign Ministry said the Georgian authorities "have committed an act of state vandalism, offending the feelings of any civilized person." It should also be noted that in the Russian Federation, the remains of Georgians who gave their lives in the war are well cared for and flowers are placed in respect to honour them.

Meanwhiile, Saakashvili was returning from Copenhagen.  Perhaps Saakashvili can use his demolition skills for the Taliban as his next job.

A reminder that in Afghanistan recently a 7th Century Buddha statue was irreparably damaged by the Taliban. The historic work of art showed Buddha in a state of meditation and was the sole example of Buddhist cultural heritage. The head and shoulders on the 20 foot statue were damaged. Terrorist Taliban and terrorist Saakashvilil, not a bit of difference between the two.