Helmut Schmidt: Treat Iran like any other Sovereign Nation 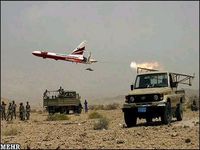 Helmut Schmidt: Treat Iran like any other Sovereign Nation

The last time the ex-Chancellor of the Federal Republic of Germany Helmut Schmid, now 90, and President Luis Inácio da Silva (Lula) of Brazil had a meeting was back in 1979 when the former, as Chancellor, visited Brazil and expressed his support for Lula, who had been forced to leave the Metalworkers’ Union by the military dictatorship.

Precisely thirty years later, the Brazilian President, on his trip to Germany, yesterday made a point of dropping into the editing room of Die Zeit newspaper, where Schmidt is a member of the editorial team. Among the many topics they spoke about was the question of Iran, which yesterday fired a long-range missile.

The ex-Chancellor stated that “according to what the newspapers say, yesterday in Berlin you stated that it is necessary to treat Iran as one treats any other sovereign nation. And (you said) that threats do not produce the goods. I want to tell you that I think you are absolutely correct”.

Or are we living in a world dominated by Anglo-Saxonic values whereby a decent man speaks English, eats bacon and eggs for breakfast, does not sport a moustache because “you can’t trust a man with a moustache, he’s trying to hide something” and the Iranians are a bunch of lunatics running around in turbans?

This is a puerile world of sweeping generalisms, such as the most visible evil, racism, a squeaky-clean world where roses and red and violets are blue, where Esmeralda is a duck, all ducks can fly and therefore so can Esmeralda. It is the black-and-white world of the cowboy film, where the sheriff in the white hat kills the “baddie”, whose hat is naturally black. It is the snobbish and elitist world where rules the precept that the darker the man’s skin, the worse is the person.

Why is there so much heat over the Islamic Republic of Iran’s peaceful nuclear programme, when other nations planned and built their nuclear arsenals and nobody treats them with such derision, among these being Israel, which sits on 100 nuclear warheads in the Negev Desert?

So while other nations possess, and in one case, even deployed, nuclear weaponry (against civilians) Iran cannot fire a conventional missile inside its own territory?

Today Professor Dr. Seyed Mohammad Marandi of the University ot Teheran predicted an Iranophobic onslaught in the western media in December, complete with fabricated stories about the Islamic Republic of Iran’s nuclear programme. Not so long ago, the same “news”papers were speaking about Saddam Hussein’s plan to buy yellowcake uranium from Nigeria (the only problem being that neither did he have the plan nor does Nigeria produce it. It comes from Niger).

Not so long ago, the same “news”papers were claiming that Saddam Hussein had WMD which posed an immediate threat to the west. The same “news”papers then reported that the WMD had not been found by the inspections teams because it was “being driven around the desert…in vehicles!”

Not so long ago, the same “news”papers were reporting the “stolen laptop” episode during the Bush regime years, where a portable computer was discovered with details about Iran’s secret nuclear program…which later turned out to be absolutely nonsensical, unscientific fabrications….like the British “wonderful intelligence” about Saddam Hussein’s WMD program, namely a doctoral thesis copied and pasted from the internet….written fifteen years previously.

Are we once again on a wild goose chase for a “smoking gun” and if we don’t find it, what happens? More deadlines (which coincide with the end of the Christian year) and pressure exerted on Teheran and its allies?

Or shall we all conduct international relations in a climate of fairness, equality and respect, like the friends, brothers and equals we all are?