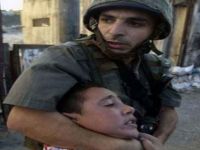 A humanitarian crisis of monumental proportions is happening in Gaza. At long last, a United Nations committee on Palestinian rights today called on the international community “to take urgent and decisive action against the continued illegal Israeli actions,” warning that Israel’s settlement activities in the occupied Palestinian territory risk undermining the whole structure of international law.

That is an extremely strong statement coming from such a source. Indeed, Israel has been since its inception at the core of flagrant violations of international law and UN resolutions.

The statement goes on to say: “Israel’s violation of international law goes far beyond the context of the Israeli-Palestinian conflict and may affect conflict situations in other parts of the world by discrediting, disregarding and seriously undermining the existing international legal system,” the UN Bureau of the Committee on the Exercise of the Inalienable Rights of the Palestinian People said in a statement.

The western pseudo "international community," due to tremendous pressure from the Zionists, agreed to a blockade of Gaza to collectively punish the citizens of Gaza for having elected sufficient Hamas Parliamentarians in Parliamentary elections in 2006 that Hamas became the government of Gaza. The US and other western countries have placed Hamas on the list of terrorist organizations. Tunnels are now the only lifelines left for Gaza since this blockade of funds, materials and persons.

On 30-01-08, Israel ‘ s High Court sanctioned the Israeli government ‘ s October 2007 decision to cut fuel and electricity supplies to the Gaza Strip which is nothing less than the legitimisation of collective punishment - in direct violation of international law.

Israel is also stripping Palestinians of their civil and human rights, giving them no prospect for appeal. The ruling came in response to petitions filed by several Palestinian and Israeli human rights organisations seeking to reverse the Israeli government ‘ s fuel and electricity embargo on Gaza, which has provoked a severe humanitarian crisis in the Strip for the past three years.

Now, reality in the Gaza Strip is one where there is an electricity deficit and where rolling blackouts across Gaza last as long as 12 hours per day in some areas. An Israeli human rights organization reports that "without electricity and without diesel for back-up generators, Gaza ‘ s sewage treatment pumps and treatment plants are pumping as much as 40 million litres of untreated sewage into the sea each day, and the supply of clean water has fallen by 30%", factors which will have serious consequences for pubic health.

All hospitals are now fully reliant on inadequate fuel reserves, and have reduced services and denied care to non-urgent cases as the power outages continue. Patients continue to die because Israel prevents them from accessing life-saving treatment outside of the Gaza Strip. At least 87 people have already died since last June, including 16 children.

In July 2009, testimony was published from 26 Israeli soldiers (two junior officers and the rest are enlisted personnel) who took part in the Gaza assault. In this report, they gave evidence that the IDF used Gazans as human shields, improperly fired incendiary white phosphorous shells over civilian areas and used overwhelming firepower that caused needless deaths and destruction.

Settler-related violent incidents and provocations are causing concern, there are almost daily reports of attacks against Palestinian civilians. Jewish settlers have been involved in shooting at Palestinian civilians, damaging their property, vandalizing places of worship, uprooting trees, burning farmland and destroying harvests. They intimidate, harass and physically assault Palestinian men, women and children with impunity. The burning of a mosque in the village of Yasuf, north-east of Salfit, is just another vivid example of settler crimes.

Palestinians are severely restricted in their daily movement for jobs, education, shopping for daily necessities and cultivating land to grow food. During the Israeli attack on Gaza, state of the art weapons were launched against starving children, including sound bombs and white phosphorous…it's not possible to conceive of anything more cowardly and disgusting. There are 64 some UN Resolutions AGAINST Israel, and what do they do about it? Not a thing. And if it weren't for the US running interference, there would be 200 of them if not more.

Israel is fully bound by the provisions of international humanitarian law, including the Fourth Geneva Convention, which stipulates that “the Occupying Power shall not deport or transfer parts of its own civilian population into the territory it occupies.”

Article 2 states that signatories are bound by the convention both in war, armed conflicts where war has not been declared and in an occupation of another country's territory.

The law of armed conflict applies similar protections to an internal conflict. Article 3 of the four Geneva Conventions of 1949 requires fair trials for all individuals before punishments; and Additional Protocol II of 1977 explicitly forbids collective punishment.

Israel ’ s occupation of the West Bank differs from almost anywhere else because it has continued for more than one generation. Demolition of Palestinian houses has been a regular event in the occupied territories.

Article 33. No protected person may be punished for an offense he or she has not personally committed. Collective penalties and likewise all measures of intimidation or of terrorism are prohibited.

Articles 47-78 impose substantial obligations on occupying powers. As well as numerous provisions for the general welfare of the inhabitants of an occupied territory, an occupier may not forcibly deport protected persons, or deport or transfer parts of its own civilian population into occupied territory (Art.49).

Fortunately many in the international community are well informed about the Gaza holocaust. Israeli leaders are becoming hesitant to travel abroad, fearful they will be arrested for war crimes.

A warrant for the arrest of Tzipi Livni was issued by a British court, but was rescinded once it was discovered that she was not in the country. Her trip was canceled after finding out about the warrant. It was issued following a complaint that the former foreign minister had been responsible for war crimes during the Israeli operation in Gaza.

Israel's statements afterwards complained that the charges sought to remove "Israel's right to defend itself." How absurd and ridiculous. They made statements that laws need to be "adapted" to "new realities." However, there is nothing new about genocide, crimes against peace, illegal occupation, collective punishment, racism, apartheid and ethnic cleansing.

"We will not agree that IDF (army) commanders and soldiers, who heroically and in a moral fashion defended our citizens against a brutal and criminal enemy, will be condemned as war criminals," it said in a statement. "We reject this absurdity outright."

As a result of tremendous Israeli pressure, Foreign Secretary David Miliband said Israeli and leaders of other countries must be able to freely visit Britain and have talks with the government. "The Government is looking urgently at ways in which the UK system might be changed in order to avoid this sort of situation arising again," Miliband said. So…right, change the laws if they do not suit Israel or any other bloody criminal in good favour with the evil empire.

As can be seen, these flagrant violations of international law and human rights cannot be allowed to continue. The information here has barely begun to scratch the surface of the crimes being committed against Palestinians. The world watches and sees. The younger generation is taking notes. Is the world going to descend into a period of total lawlessness, a dark age, an age where human rights, human life and human dignity may come to an end? Is this the kind of world we want to live in?