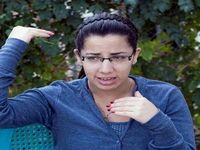 Right to education: With only two months to complete her bachelor's degree in Business Administration, a student was arrested and driven home without charge. "Palestinian education and propaganda are more dangerous to Israel than Palestinian weapons." - Ariel Sharon, then Israeli Prime Minister (1)

The Case of Berlanty Azzam

Last Wednesday (09 December 2009), the High Court of Israel refused permission for a Palestinian student from Gaza to continue her education in the Palestinian city of Bethlehem, which is located in the West Bank, Palestinian territory illegally occupied by Israel. The student, Berlanty Azzam, is 22 years old and needs only two months to complete her degree course. However, on 28 October this year, returning from a job interview, she was arrested by the Israeli Occupation Forces (IOF).

Following the arrest, she was handcuffed, blindfolded and removed that same night in Gaza, despite the explicit promise made to her lawyer that she would be entitled to meet with him. The IOF claims she was illegally in the West Bank - disregarding the fact that no one can be considered an illegal inhabitant of their own country.

Assisted by an NGO (Gish - Legal Center for the Defense of Freedom of Movement), she appealed to the judiciary of the occupation forces against the decision, but the Court upheld the decision of the Israeli government and affirmed the expulsion, despite acknowledging that the withdrawal of the student violated her right to testify in court. The judiciary of the Occupation was also requested that Israeli authorities allow the student to complete her studies, since there were only two months left to do so, but issued an order to have the application rejected.

Contrary to the Oslo Accords, which state that a change of address should be communicated to the Palestinian Authority and the latter only notifies Israel, the occupation authorities refused to accept several requests for Berlanty Azzam to change her address.

Azzam is not accused of any crime and even the IOF had no security reasons for the expulsion. The Israeli military commander in the area had granted permission for her to enter the West Bank after the extremely cumbersome procedure of investigation. After the decision, she said she was disappointed: "I am deeply disappointed and do not understand why Israel is preventing me from continuing my studies. They do not claim that my return to Bethlehem University is a security threat, and there were no grounds for my expulsion. Studying in a Palestinian university is my right and the right of every Palestinian student."

Since 2000, Israel refuses to allow students to leave Gaza to study in other places. Human rights organizations estimate the number of Palestinian students born in Gaza having gone to the West Bank is 25,000 and they are now at risk and constant threat and could be imprisoned and "sent" to Gaza at any time.

How does Israel impede the Palestinian right to education?

The theme of education of Arab-Palestinians or Israeli Arabs in Israel is also wide and marked by glaring violations of human rights promoted by the occupying power. The State of Israel has been illegally occupying the Palestinian territories since 1967, denying the Palestinian Arab students their right to education for a variety of strategies. The first is through physical barriers such as the countless checkpoints installed on Palestinian land and roads where traffic is forbidden to Palestinians, preventing freedom of movement. The Apartheid Wall in Israel can be placed in this category of physical blocks.

Other barriers are materials (i) the non-permanent barriers such as sieges and curfews and military (ii) incursions (including universities and student accommodations which are closed indefinitely). Israel also controls the entry of certain books and journals, keeping a ban on books produced in the Arab region, including Syria and Lebanon, books that could be purchased at lower costs for Palestinian students. The exchange of students is severely impaired and Israel strictly controls the granting of work visas for foreign researchers.

Finally, we cannot forget the constant bombardments perpetrated by Israel on the civilian infrastructure and government (bridges, highways, streets) that have been destroyed, causing the displacement of the population. Just as an example, in January this year, during Operation Cast Lead, Israel destroyed two Palestinian schools maintained by the UN, a training center and a school for girls and bombed the Department of Science, University of Gaza. In the war of June 2006, when Israel attacked both Lebanon and Gaza, the University of Gaza was attacked.

The destruction of the educational infrastructure is accompanied by constant "administrative" arrests of intellectuals, journalists and teachers, without any right to defense and without any charges (Hammond, 2006) and may last more than three years.

The data are many: in December 2007, the president of the directory of students at Birzeit University was arrested for a year for belonging to the student organization. At least 21 other students are in the same condition. At least 30% of the students of this university have beensubjected to arbitrary questioning. At the same institution in 2006-2007, 13 students were denied entry to take courses on language and Arab culture. In 2008, eight students were prevented from carrying out the same courses and, in the academic year 2008-2009, two other students were denied visas.

Israel considers it a security priority to hinder the political and social maturation of the Palestinian population and to prevent the inheritance of their cultural values.

These measures are aimed at attacking Israeli history and Arab-Palestinian identity to prevent the development of its human capital and keep them in the current condition of underdevelopment, denying the fundamental right of access to education of entire generations. The attempt to curtail social and cultural rights makes an immediate impact on the possibilities of economic and political sovereignty of a nation. Very simply, the practice is an Israeli attempt to destroy an entire society in order for it to be exterminated (final solution).

HAMMOND, Keith. Palestinian Universities and the Israeli Occupation. 2006. Text provided by the author.

Ministry of Foreign Affairs. PM Sharon: Palestinian education and propaganda are more dangerous to Israel than their weapons . Press Release - Embassy of Israel in London. Available at <http://london.mfa.gov.il/mfm/Data/66887.doc>. Accessed 09/12/2009.

Vinicius Miguel Valentin Raduan is Social Scientist at the Federal University of Pernambuco and Master in Political Science from the University of Glasgow, a translator of the Marxists Internet Archive.