Circus acrobats Yulia and Alexander Volkov (husband and wife) fell on the ice-covered arena of Moscow’s iconic Nikulin Circus during rehearsals. Both have been hospitalized. An eyewitness said that the acrobats made a mistake when they were rehearsing a stunt about six meters above the arena. 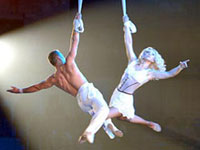 Yulia and Alexander Volkov are professional trapeze artists. They have many years of work experience, but this time, as an eyewitness said, they decided to add something new to their number. They recently returned to Moscow from a vacation, which probably showed a negative influence on their physical activities too.

Yulia fell down on ice from the height of six meters. She suffered a basal skull fracture, a stomach trauma and an open fracture of the right shin. Her husband, Alexander, had the fractures of his both ankles and heel bones.

The circus act the artists were rehearsing is considered very difficult and dangerous. It includes 330 seconds of performing in the air and wrapping their limbs in long swaths of cloth without using safety wires, similar to performances on a flying trapeze.

The Volkovs have worked for the Nikulin Circus, one of Russia's oldest circuses, since 2007, RIA Novosti reports.

It was their last rehearsal during the day. “One more time and we are going home,” they said before the accident.

Yulia fell flat, her face down and remained motionless for a while. Doctors later described the woman’s condition as extremely severe. Her husband, Alexander, will recover.