A Russian immigrant who murdered a family of six in Israel was anonymously treated by a psychiatrist in his native city of Chelyabinsk. 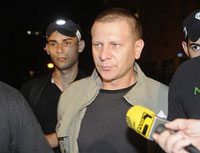 The tragic death of three generations of the Oshrenko family who resided in Tel Aviv, Israel, shook the world. The cold-blooded murderer took lives of an elderly couple, their son and his wife, their three-year old girl and a baby boy. The police were looking for the monster who committed the worst crime in Israel’s history with a special zeal. The murderer, a 39-year old Chelyabinsk native Dmitry Lakin, immigrated to Israel under the name of Demian Kirilik and was known to Russian police as Karlik (Dwarf). The bloody murder could have been avoided if in 2004 Israel had extradited Lakin to Russia where he was wanted on suspicion of robbery in Saint Petersburg.

Dmitry Lakin (Demian Kirilik in Israel) met Dmitry Oshrenko while working in Premier restaurant opened by Oshrenko right after his immigration from former Soviet Union. In 2004, Oshrenko’s business was flourishing, which made Lakin very envious.

Kirilik worked as a headwaiter in Oshrenko’s restaurant. He had a gambling problem and large debt and dreamt about buying a nice apartment like his boss whose family lived in a large apartment in the town of Rishon Lezion.

Kirilik knew the boss’s family, his 56-year old parents Ludmila and Edward Oshrenko, who were helping their 28-year old daughter-in-law Tatyana Abramovich to raise her three-year-old daughter Ravital and her baby Nathaniel.

Galina Naudman, a friend of Ludmila Oshrenko, told the police that the conflict began after surveillance footage revealed that Kirilik habitually drank the restaurant’s vodka on the job. She said that Dmitry Oshrenko fired him in front of other staff in 2007. Later he gave the job to Kirilik’s wife Natalya. Kirilik was upset and started blackmailing Dmitry threatening him to tell officials that he was not paying taxes.

Kirilik also suspected his wife of having an affair with Edward Oshrenko who was in charge of the restaurant’s personnel. His wife Natalya complained to him that Edward Oshrenko gave her too much work and kept inventing new responsibilities for her.

According to his co-workers, Kirlilik was convinced that Edward Oshrenko oppressed Natalya to make her more lenient. That’s when he began making plans of revenge. The police think that Natalya stole the keys to Oshrenko’s apartment at her husband’s request and assisted him in the organization of this brutal murder.

One September evening, Demian went to his boss’s house. He opened the door with his key since the family was not in, and stole $500 dollars from the drawers. The family did not react to the loss and Kirilik became infuriated thinking that such a sum of money meant nothing to them.

Six weeks later, Kirilik came back to Oshrenko’s apartment with a knife and a lighter. He got into the living room and was met by his boss’s parents. He stubbed them first, and then stubbed the kids. Hi did not spare the four-months-old baby. Then he sent a text message from the cell phone of murdered Ludmila to her daughter Tatyana asking her to come home as soon as possible.

As soon as Tatyana entered the apartment, Kirilik stubbed her with a knife in her chest. He severely beat his former boss who tried to fight back. Dmitry died from multiple incised wounds.

Trying to hide his traces, Kirilil turned on the gas and lit the apartment with his lighter. However, the apartment did not burn down entirely. Both Kirilik and his wife came to the funeral.

The family friend Naudman said that the Oshrenko family emigrated from Tajikistan in 1991. Edward, a historian, worked as Deputy Director of the car fleet of “Tajikistan” movie studio in Dushanbe. During perestroika he became a co-owner of a Scottish bar, butcher shop, and a small restaurant. His son Dmitry helped him with the business. In Israel his son took the leading role in business.

Demian’s former co-workers suggested that Kirilik could have been a murderer. Police arrested him in a resort town on the Egyptian border. His wife Natalya was arrested six days after the tragedy. The murderer’s parents, his 17-year-old daughter and his wife’s sister are under house arrest.