The police of Russia’s Perm region solved the brutal murder of a homeless man, slaughtered by three of his own friends. The criminals ate a part of the corpse and sold the rest to a kebab kiosk. 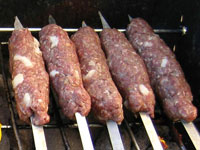 Forensic experts have taken samples of the suspicious meat to find out if the kiosk was selling kebabs made of human meat.

The homeless men were living in dug-outs in the woods near the city of Perm. Three men attacked and brutally beat their 25-year-old friend, hit him with a hammer several times and stabbed him. The man died of injuries on the spot, the Komsomolskaya Pravda newspaper wrote.

The murderers dismembered the body and then buried the upper part of the corpse near their dugouts. They saved the lower part of the corpse and made a dinner from it for the whole “family.” When the cannibals were stuffed, they sold the rest of the meat to the nearest kebab kiosk.

The detained men said that they had killed the man out of jealousy. One of the detainees said that the victim was trying to steal his girlfriend from him.